Fête by a Riverbank 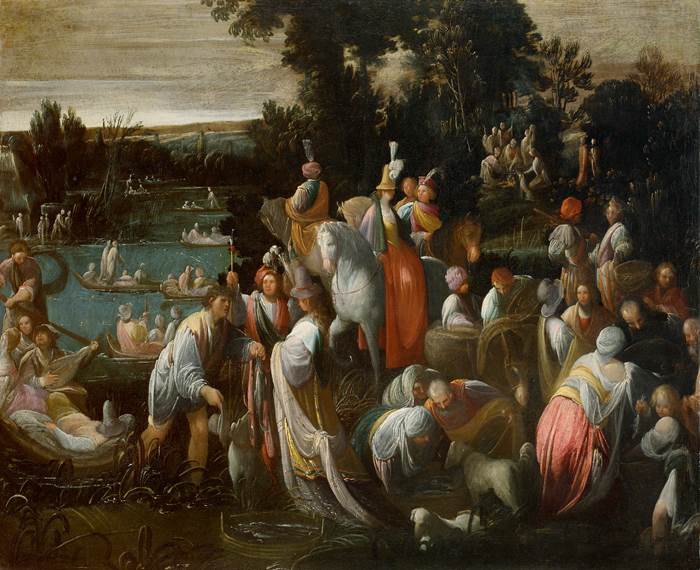 
Although Mastelletta's career is that of a seventeenth-century artist, he is strongly related to the sixteenth century in inspiration. His style was influenced by the most atypical Mannerist painters, from Nicolò dell'Abate (1509 or 1512-1571) to Jacopo Zanguidi, called Bertoja (1544-1574), and his oeuvre was one of the last expressions of "European Mannerism". It is this style and his visionary quality that define him as a singular artist, especially within the genre of Bolognese landscape painting of the beginning of the seventeenth century.

His grand, open-air fêtes champêtres, combining landscape and slender, silhouette-like figures, often arranged around tables laden with food and depicted through a simplified, expressionistic design, lie at the root of his fame and originality. Yet his artistic novelty has always perplexed scholars when it comes to the mysterious side of his compositions. Should one read his subjects as drawn from the Old Testament, or, more simply, relate the images to a contemporary context? We would lean towards the latter interpretation, especially as regards our painting. It appears to be a reflection of aristocratic life during the second half of the sixteenth century, when nobles offered sumptuous entertainment in their country villas, as recorded by Bolognese chroniclers of this period (1). At dusk, suggested here by the sombre sky and strong areas of shadow that cross the canvas, a group of nobles wearing hats, some of them on horseback, have gathered by a riverbank near an extensive fishing party. Clearly visible on the water's surface are a number of fishing-net floats, together with boats loaded with people crossing the river to reach the other bank. Music is being played, and in the foreground, a fisherman has taken a long fish out of a bucket placed among the rushes, and appears to be offering it to an elegant lady. In the background, slender figures are busy around a cauldron, brought to the party on mule-back. Mastelletta has retained Nicolò dell'Abate's free, direct handling, thus moving away from the linear side of Mannerism. Our painter expresses an entirely different concept of form, which becomes evanescent and dreamlike, solely enriched by precious touches of red, yellow and pink.

The present composition appears to have had a pendant - a painting now in the Musée des Beaux-Arts, Orléans, as suggested by the fact that both paintings emerged in France in the Drouot auction rooms, although at very different dates (2). Moreover, the dimensions of the canvases only differ by two centimetres. Anna Coliva dates the work in Orléans very early, c. 1610-1611, which would be appropriate for our picture, during the painter's Roman sojourn, when he met with genuine success "a far questi suoi paesi con si galanti e spiritose figurine", as Malvasia states (3). This precisely conveys the mystery and energy of his landscapes, which were so novel compared to the direct precedents established by the Carracci - one only has to recall pictures such as the Fishing Party and the Hunting Party in the Musée du Louvre by Annibale Carracci (1560-1609). If one believes Malvasia, it was Annibale himself who encouraged Mastelletta to develop this approach to landscape, and justly so: according to the biographer, all the important families competed to obtain a painting by the artist (4). This would explain why the picture in Orléans is known in several versions (5).

We should remember that Mastelletta was trained in the Carracci school, where he was a friend of Guido Reni (1575-1642), his exact contemporary, but also that he chose to express himself in a completely personal manner by creating a synthesis of landscape painting, combining the styles of Nicolò dell'Abate, Dosso Dossi (c. 1489-1542), Bertoja and the Bolognese classical landscape as developed by Annibale Carracci, Domenichino (1581-1641), and Albani (1578-1660). Malvasia notes his "bizarre" character, which drove him to end his life as a depressed recluse (and causing much ink to be spilt on the matter). Nonetheless, as Wittkower has emphasized, it is hard to establish cause and effect between the artist's sanity and a composition as festive and innovative as ours (6).

Notes:
1- Some of these Bolognese accounts appear in a recent collection of texts published by the Fondazione del Monte di Bologna e Ravenna: volume 7 contains the chronicle by Giovanni Battista Marescalchi, Cronaca 1561-1573, edited by Ilaria Francica and with an introduction by Armando Antonelli and Riccardo Pedrini, Bologna, 2002, p. 33-34 (see especially the description of the party given on 24 August 1565).
2- Exactly when the painting in Orléans (98 x 118 cm) was offered at Drouot remains unclear, but it was certainly prior to 1962, when it appeared on the art market in The Hague. It was acquired in London in 1964 by the Orléans Museum.
3- Carlo Cesare Malvasia, Felsina Pittrice. Vite de pittori bolognesi (1678), 2 vol., éd. Giampietro Zanotti, Bologne, 1841 (éd. 2004), vol. 2, p. 69.
4- Malvasia, as in note 3, p. 69: "[...] cominciarono a fare a gara quel Principi per ottenerne [I suoi paesaggi], facendosi sin copiare da lui talora gli stessi siti e le précise figure; il perché tanti se ne vedono in quelle Gallerie [...]"
5- Anna Coliva, Il Mastelletta. Giovanni Andrea Donducci 1575-1655, Rome, 1980, nos. 12, 13 (Orléans, Musée des Beaux-Arts; Rome, Galleria Nazionale d'Arte Antica, Palazzo Barberini). Another version, formerly in the Zeri collection in Mentana, appeared later (see G. Manni, E. Negro, M. Pirondini, F. Zeri, eds., Arte Emiliana dalle raccolte storiche al nuovo collezionismo, Modena, 1989, pp. 70-71, no. 44). The replica of the Orléans painting had a pendant that replicates our composition (no. 44a); both paintings were auctioned at Finarte in Rome on 21 May 1996, lot 135.
6- R. and M. Wittkower, Born under Saturn, London, 1963.