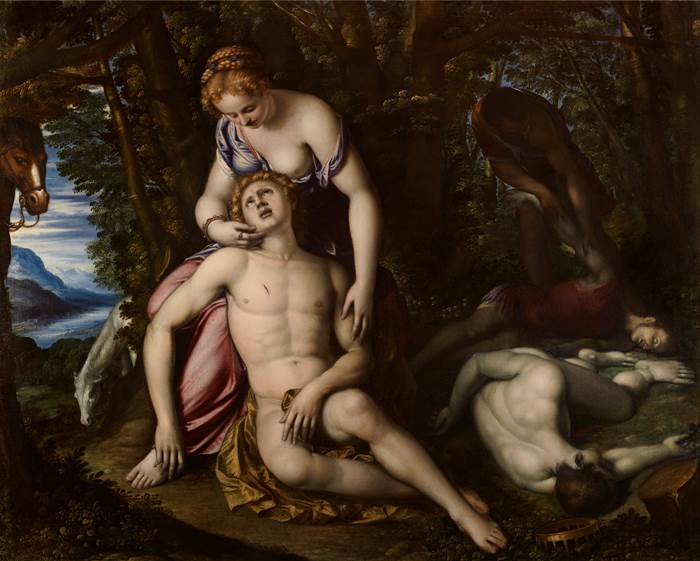 Comparative works:
Drawings: three preparatory studies for the figures of Medoro and the fallen warriors (Milan, Civico Gabinetto dei Disegni del Castello Sforzesco) were presented together with the painting in the Rabisch exhibition (1998, pp. 285-286, nos. 106, 107, 108).

The subject of this painting is attested to by a description by the Milanese painter and writer Giovan Paolo Lomazzo (1538-1592) in one of his Rabisch texts, and the picture itself was the object of an in-depth study by Maria Teresa Fiorio during the exhibition on the Grotesque in sixteenth-century art held in Lugano in 1998.The opening of Lomazzo’s text not only indicates the name of the painter but that of the patron too - “IN RÒD D’ONA PINCIURA / FACCIA DAR SIMOGN PETREZAGN / AR SIGNÒ GERÒLLEM LEGNAN / IN RENGUA TOSCANA”, which can be more readily under-stood in a translation by Professor Dante Isella: “In praise of a picture painted by Simone Peterzano for Gerolamo Legnani”. There follows a highly detailed description of the paint-ing in the “Tuscan tongue”, noting the poses of the two heroic protagonists, the presence of warriors nearby and the shadow and light of the rising sun, which all correspond explicitly to the image before us (1).
The painter Simone Peterzano is better known today as the teacher of Caravaggio (1571-1610) than for his own work. Caravaggio frequented his workshop in Milan between 1584 and 1589, when Peterzano left for Rome ,perhaps accompanied by his pupil. According to what suited him, our painter proclaims himself of “Bergamasque” origin, and elsewhere as the “pupil of Titian”, neither of which can be documented, especially as regards Titian (1488/89 -1576)(2). However the latter connection appears entirely plausible since there is a strong Venetian element in Peterzano’s early works, not only reflecting Titian but Veronese (1528-1588) and other great Venetian painters of the Cinquecento.
As for the patron, new information has emerged through the archival work of Robert S. Miller. After the Rabisch exhibition, the scholar published the contract of 8 November 1572 for the frescoes in the convent church of San Maurizio in Milan, which mentions Gerolamo Legnani, this time as guarantor for Peterzano in the event the painter did not adhere to the terms agreed. The document also defines Legnani as a noble, and he was no doubt the artist’s most important patron in Milan. Arslan, who was the first to publish the painting in 1959, suggested dating the work to about 1585, but its resemblance to the frescoes in San Maurizio would indicate a much earlier date, around 1575, as Maria Teresa Fiorio suggested in the Rabisch catalogue. In her last contribution on this painting (2000), she reiterates the dating and adds more exact information: bearing in mind that Lomazzo gives an extremely precise description - down to the details of lighting - it seems evident that he viewed the work at first hand, and yet we know he became blind shortly before 26 April 1572 (3). Furthermore, since Lomazzo takes care to note the painting’s owner, one must imagine that Legnani already had it in his possession before the date of the signed contract for the frescoes in San Maurizio. The discussion of chronology is of prime importance because at this date Peterzano was not yet legally resident in Milan, as suggested by the style of the painting, which is still so influenced by Venetian art. Before Arslan attributed it to Peterzano, it was believed to be by Veronese, whose style is indeed echoed by the figure of Angelica. The intense expression of colour, especially the yellow drapery and its icy luminosity, the foliage, handled with broad brushwork (in contrast to the detailed description of the foreground), and the dissolving landscape view, are all reflections of Venetian painting technique.
The scene described was inspired by Ariosto’s Orlando Furioso (Canto 19, 20-36), an epic poem published in 1516 and an inexhaustible source of subjects for painting. Here the figures of Angelica and Medoro are presented as a treatment of the Pietà in “chivalric” mode, and the painter uses the play of gazes and hands to express Angelica’s compassion for Medoro, wounded during a violent battle between Christians and Saracens; this in turn is intended as a backdrop to evoke the nascent love between the fair Christian heroine and the pagan youth. On the right lie the bodies of Medoro’s companions, King Dardinel and the faithful Cloridan, whom a third figure - perhaps the shepherd who comes to the aid of Angelica - is attempting to raise. In this part of the painting one can appreciate Peterzano’s naturalism in the refined effect of light coming through the foliage and touching the shoulder of the shepherd, conveyed with a white, vibrant brushstroke, while the front part of his body is plunged into shadow. The three preparatory drawings published by Maria Teresa Fiorio show how concerned the artist was to define poses and expressions: on the first sheet, the hero’s pathos, and on the second, the physical abandon of his body. Drawing serves the creation of expression, rather than some ideal concept, and this is also demonstrated by the anatomical distortions of the three figures at right, who appear on the third sheet of studies, and reflect the painter’s new stylistic direction just after arriving in Milan. Peterzano’s graphic oeuvre contains a very large number of figure studies, and these sheets (mostly in the collection of the Castello Sforzesco, Milan) often present variations on an individual figure.
This painting is an early example in the artist’s career of a synthesis between his Venetian experience and the impact of Lombard realism, and represents the rediscovery of one of his rare profane subjects, like the Venus and Cupid with Two Satyrs in a Landscape (Milan, Brera Gallery), painted slightly earlier than our composition (4).