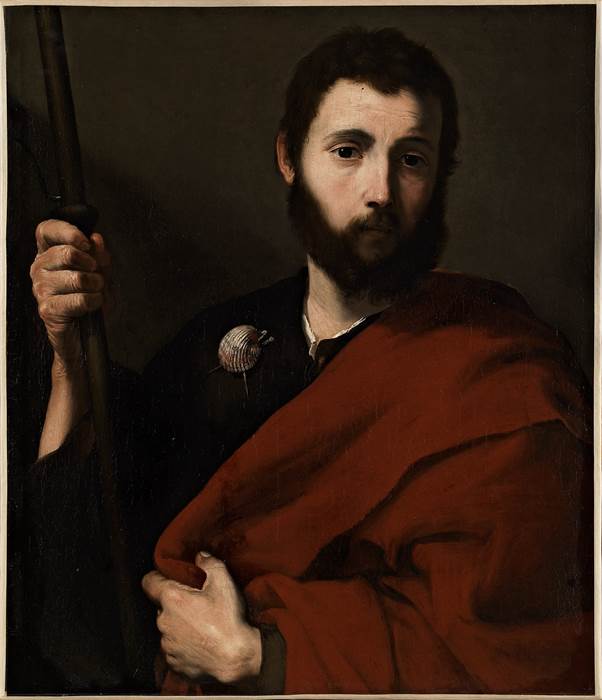 Saint James the Greater, shown half-length and tending to a three-quarter profile, but with his gaze fixed decisively at the beholder, is here presented as a pilgrim, as indicated by his emblematic cockle shell – almost unobtrusively attached near his right shoulder – and by the solid staff on which he leans. The wooden staff crosses the whole composition on the left, creating a fine diagonal line that lead the eye upwards. In Spain, this saint’s popularity endures through pilgrimage to Santiago de Compostella, where his body is buried.
The latest Spanish edition of Nicola Spinosa’s Ribera catalogue (2008) reproduces our canvas, only known until last year by its former presence in the Helikon Gallery, London. The subject was often treated by the artist, and the model for this composition is the painting of Saint James the Greater (Madrid, Prado Museum), part of a series of apostles executed in about 1630 for the Duke of Alcalá, Viceroy of Naples between 1629 and 1631. This Apostolado had an extensive legacy, and as regards our composition alone, Nicola Spinosa lists another replica, also painted by Ribera, now in Genoa in the Palazzo Durazzo Pallavicini. Furthermore, our Saint James shares almost identical dimensions with the paintings in this series.
But the resemblances stop there. In our canvas, the Spanish painter, who had resided in Naples since 1616 and was at the summit of his technical brilliance and fame, lends a new, brighter tone to this religious icon by modulating the tenebrist manner that was so dear to him. A diagonal of light creates a brown-green background that serves particularly well to set off the apostle’s expression, cordial and gentle but no less full of conviction. This new psychological dimension in Ribera’s oeuvre is simultaneously balanced by the strong architectural form of the red robe that half-clothes the saint, providing a strong illusion of his mass. We can already sense the artist’s evolution towards what would culminate around 1635 in his espousing the light-filled trend in Neapolitan painting – a “neo-Venetian” manner, as it has been defined – that emanated from Rome. It seems to us that the face, described with a loaded brush in pinks and bright whites, already testifies to that evolution.