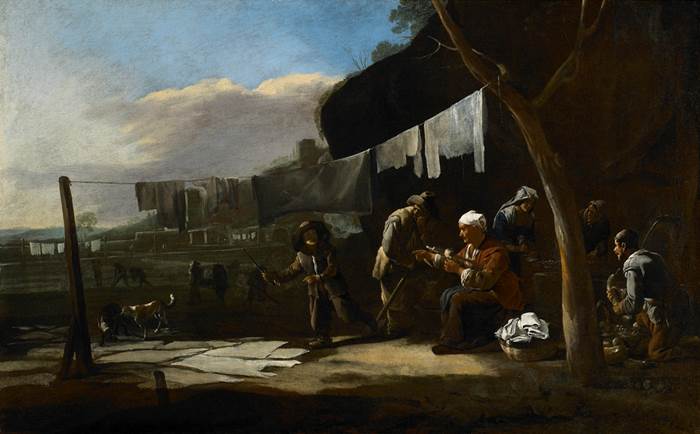 Provenance: Vienna, private collection. Literature: - Véronique Damian, Sweerts, Tanzio, Magnasco et autres protagonistes du Seicento italien , Paris, Galerie Canesso, 2009, pp. 30-37; - Guido M.C. Jansen, « Jesus Admirabilis. Michael Sweerts, Jan van Troyen, Jacques Louis Durant and Michael Wening », in Jonathan Bikker, Erik Hinterding, Everhard Korthals and Eddy Schavemaker (eds.), “Gij zult niet feestbundelen”. 34 bijdragen voor Peter Hecht, Amersfoort, 2016, p. 80, note 2. Our composition is a significant addition to the oeuvre of Michael Sweerts, and represents an important discovery since the monographic exhibition dedicated to the artist in 2002 (1). According to Rolf Kultzen, the artist must have painted this work shortly after arriving in Rome in 1646, aged twenty-eight. The scene provides brilliant evidence of the artist’s style in his initial Roman period in the sphere of the Bamboccianti, the name given to the painters of Flemish origin active in Rome whose special focus was on scenes drawn from popular life, with small, highly characterized figures. Pieter van Laer (1599 – c. 1642), the pioneer of this sort of genre painting, had already died when Sweerts arrived in the Eternal City, and even if artists were still treating such subjects, they approached them in a more structured manner. Our Flemish painter (since it has now been established that he was born in Brussels in 1618) paid close attention to the world of common people, varying his subjects and moving with ease from outdoor to indoor scenes, painting peasants or city dwellers, individual studies dal vero or portraits of men from more elevated social classes, as well as allegorical portraiture, to which he seemed to be partial. In this picture Sweerts tends towards a condensed narration, with strongly individualised figures, each relating to the other, and with emphasis laid on still life elements. The result of this carefully determined vocabulary is a depiction of a precise moment in the life of a peasant family on the outskirts of Rome. The artist conveys the picturesque side of their activities, divided between men, seen digging the fields and gathering vegetables (in this case, gourds), and women, shown busy wringing out laundry and putting it out to dry. The dogs treading on the linens have not escaped the vigilant eyes of the grandmother, who continues her spinning while asking her grandson to chase them away. His stick raised, he already heads towards them to carry out his task. Clearly depicted at the centre of the composition, the figure of the young boy already shows the chiaroscuro effects that define Sweerts’ style, with a highly calculated play of light that only touches his chin, impeded by the wide-brimmed hat. Similar effects are skilfully created by the laundry hanging from the line in the foreground, which here and there casts shadows on the figures or the ground before them. In the distance, other families reproduce the same activities, as autumn approaches, heralded by contrasting light and cool tonalities. As was often the case in compositions from this period, the dominant tones are brown, even if the greys sometimes take over, and the presence of red in a piece of clothing hardly serves to warm the whole scene, which remains dominated by the blue of the sky. In his lingering over these simple, seemingly immutable ways of life, the artist becomes a chronicler of his era. The compositional layout, with figures grouped together on the right so as to leave an open expanse of landscape on the left, is typical of Sweerts’ early Roman paintings. This recurs in the Street Scene (Rome, Galleria dell’Accademia Nazionale di San Luca), which also shows his peculiar approach to illumination, with light falling from above and concentrated almost exclusively on the two figures in the immediate foreground. These “Folk Scenes”, as Rolf Kultzen has named them, had their direct source in the bambocciate and were to gradually evolve towards a respectable academic manner that enabled these picturesque subjects drawn from popular life to become more conventional, with descriptions of artists’ workshops or bucolic walks in the Roman countryside, as in A Couple Visiting Shepherds in the Campagna (Rome, Galleria dell’Accademia Nazionale di San Luca)(2). The rediscovery of Michael Sweerts’ oeuvre was the result of art historical research during the last century, revealing a figure of great originality and an eventful but brief life that took him from Rome to Brussels, Amsterdam, and finally Goa, in Portuguese India. His realistic, delicate art, easily comparable to that of Louis Le Nain (1593?-1648) or Vermeer (1632-1675), remains fascinating for its melancholy and expressive sentiment, although (as Rolf Kultzen has pointed out), any convergence with the work of these two artists is only superficial, and no more than a casual resemblance as regards Vermeer. In 1655, enriched by his Roman experience, he was already in Brussels, where he founded an academy (1656-1558) that gave pride of place to portraiture. But his peripatetic life did not end there – after a sojourn in Amsterdam he travelled to Goa as member of a French Lazarist mission on its way to China. Notes: 1- Michael Sweerts 1618-1664, exh. cat. by Guido Jansen and Peter C. Sutton, Amsterdam, Rijksmuseum, 9 March – 20 May 2002; San Francisco, Fine Arts Museums, 15 June – 25 August 2002; Hartford, Wadsworth Atheneum Museum of Art, 19 September – 1 December 2002. 2- Rolf Kultzen, Michael Sweerts Brussels 1618 – Goa, 1664, Ghent, 1996.