Master of the Blue Jeans 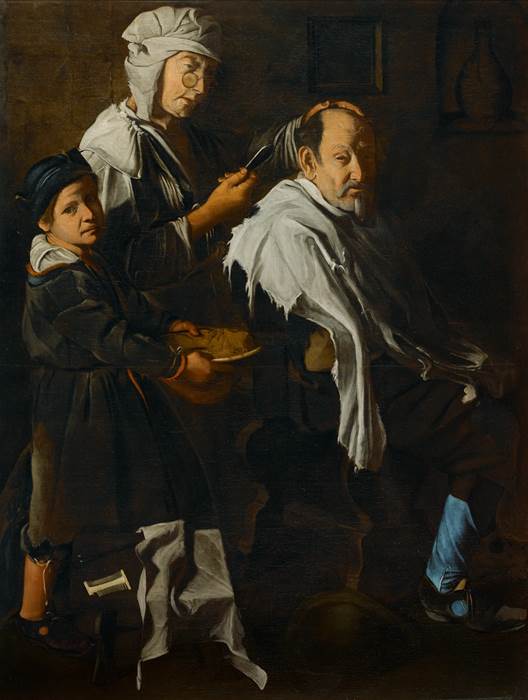 This description of a barber's shop is representative of the trend for realism that swept through Lombardy with the work of foreign artists such as the Austrian painter Cipper, called Todeschini (1664-1736) or the German Eberhart Keilhau, called Monsù Bernardo (1624-1687). Our picture can be attributed to one of these Northerners active in the Lombard region, a Flemish painter known by the conventional name Maestro della tela jeans (‘Master of the jeans material’), and was presented as such by Gerlinde Gruber at a symposium held in Ljubljana in late 2005, before her publication of a monographic article in 2007.2 Still shrouded in mystery, this master emerged only recently as the author of A Mother Begging with Her Two Children (now in Milan, Koelliker collection) when the painting was presented in the exhibition on genre scenes held in Brescia in 1998 -1999.3 The Koelliker canvas shows a mother wearing a skirt made of thick royal blue material, the coarsely woven “toile de Gênes” that was to have an enduring legacy as the forerunner of modern blue jeans. This peculiarity provided the still anonymous master with his name.4 In both compositions, he has chosen to present three figures in a pyramidal arrangement that stands out clearly against a dark brown background. The scene in our painting is presented in a manner both touching and harshly truthful, with an old woman busy shaving the beard of a man, no longer young himself. Her left hand rests in an almost familiar way on his head, suggesting she might be his wife rather than an unknown person performing the barber’s task. Her sole assistant is a young boy, who approaches holding a bowl with a chipped side. A small stool, casually covered with a white cloth, serves as a surface for a partly toothless comb and pair of scissors, while a hat is barely visible on the floor beside it; each object is treated in isolation. The silent gazes and sombre expressions are loaded with resignation and convey as much about the destitute condition of the sitters as the ragged material and threadbare clothes dwelt upon by the painter. The details of the old woman’s eyeglasses, her turbaned head and swollen hands all reflect a direct capturing of reality.
Gerlinde Gruber, who dates our painting to the last quarter of the seventeenth century, has assembled two other works around the canvas in the Koelliker collection, each displaying the influence of Michael Sweerts (1618-1664), a Flemish painter whose career developed in Rome amid the Bamboccianti.5 Sweerts’ influence on our painter lies less in the fine painting manner of the Flemish tradition than in the use of muted colours, juxtaposed in subtle harmonies of browns, greys, and the cool blue of the man’s stocking, which directly evokes the “tela jeans” of the painter’s nickname.
Since our initial publication and the most recent article by Gerlinde Gruber, another version of the subject has come to light in the Museo Baroffio, Varese. Slightly smaller in height – it was no doubt cut down – this version does not reveal any major variant, other than the plain background, whereas our composition has a small niche with a bottle. This is an exciting discovery because it tells us about the artist’s creative process: he did not hesitate to repeat his composition, no doubt to satisfy the needs of collectors. A parallel case, published by Gerlinde Gruber and involving two versions of A Mother Sewing with Her Two Children (one with the Caylus Gallery, Madrid, the other in Milan in the collection of the Fondazione della Cassa di Risparmio delle Province Lombarde) appears to indicate that this was not uncommon for the artist.6