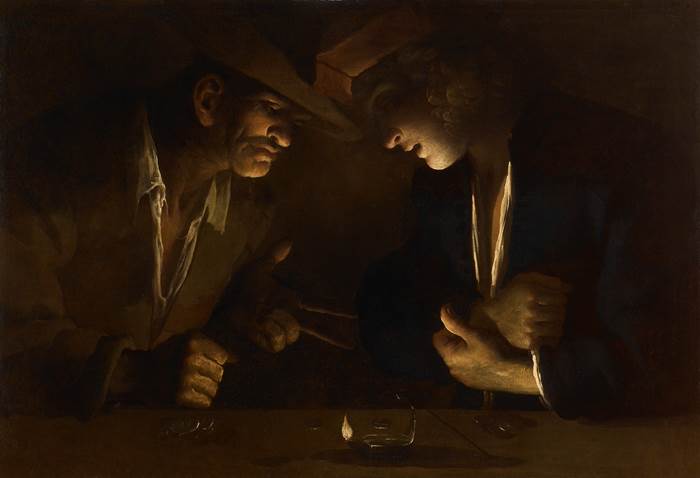 
Pietro Ricchi left his native Lucca early on for Florence, where in 1620-1623 he became a young apprentice to Domenico Passignano (1559-1638), before moving on to Bologna (between 1624 and about 1627). Baldinucci states he was trained there by Guido Reni (1575- 1642), and then in Rome for two years. Subsequently, he travelled to France, where opportunity drew him from south to north: Aix-en-Provence, Arles, Lyon, and Paris. His acquaintance with contemporary French art, and in particular that of Claude Vignon (1593-1670), was important for his work. In about 1634-1635, he returned to Italy, sojourning in Milan, then Bergamo and Brescia (until 1652), followed by Venice (from about 1652 to the late 1660s, and once again in 1672), and finally Udine, where he died. In fact numerous works by him survive in the Veneto and Lombardy. These peregrinations explain the extreme variety of cultural influences in Ricchi’s oeuvre, yet in spite of recent monographic studies, the dating of his work, and even some stylistic definition, remains perplexing.1
However, it is likely that the Morra Players was painted during his time in Bergamo, and in any case after his return from France. As Mariolina Olivari has justly noted, Ricchi’s output at this moment was defined by figures presented in strong chiaroscuro that seem to stand out markedly from the background, at once influenced by French Caravaggism, which typically used candles as a source of light, and by the work of the Milanese painter Morazzone (1573-1626).2 The abstract colour of the latter revived and renewed the sombre range of colours chosen by Ricchi after his return from France; thus the spectator’s attention is caught by the red hat of the player on the right – an unexpected tonality in the painting’s brown, almost monochrome palette. It was at this point that Ricchi had contact with the painters working south of Cremona and Crema, among whom we should mention Giacomo Barbelli (1604-1656), who also favoured dynamic contrasts of light in his nocturnal scenes – as in his Adoration of the Shepherds in the sanctuary of the Madonna della Brughiera in Trivero.3
Our subjects are indulging in a game of chance called morra, better known as "rock, paper, scissors". The composition and its emphatic use of chiaroscuro to describe profiles and salient points of physiognomy, finds a number of echoes in paintings from the artist’s Bergamo period.  One parallel lies in his choice of physical types: aged, humble figures are shown with very long fingers, highly prominent chins, and eyes half-absorbed by the penumbra, while the faces of the young people – more well-to-do – have more regular, almost suave features.  These expressive elements appear in the Adoration of the Shepherds in a private collection in Lombardy, which has the same horizontal format.4  Without a trace of blasphemy, the shepherds could be members of the same family as our left-hand player, while the Virgin may be compared with our young right-hand player.  Moreover, similar faces – especially as regards the older figures – recur in the Last Supper in the Museo Civico in Riva del Garda, painted in about 1644.  This period also saw the two versions of the artist’s Judith – one in the Museo di Castelvecchio in Verona and the other in the Castello del Buonconsiglio in Trento – and probably the Card Players in Forlì (private collection) as well.5  But other paintings by Ricchi reveal formal elements that connect them to ours, such as the two canvases of a Couple with a Flask and a Candle (with only a few variant passages between them) in private collections.  Very much like our young man on the right, these figures are depicted in an abstract, picturesque manner, and like the Morra players, they are lit di sotto in sù, which sets them apart in an isolated, magical world.