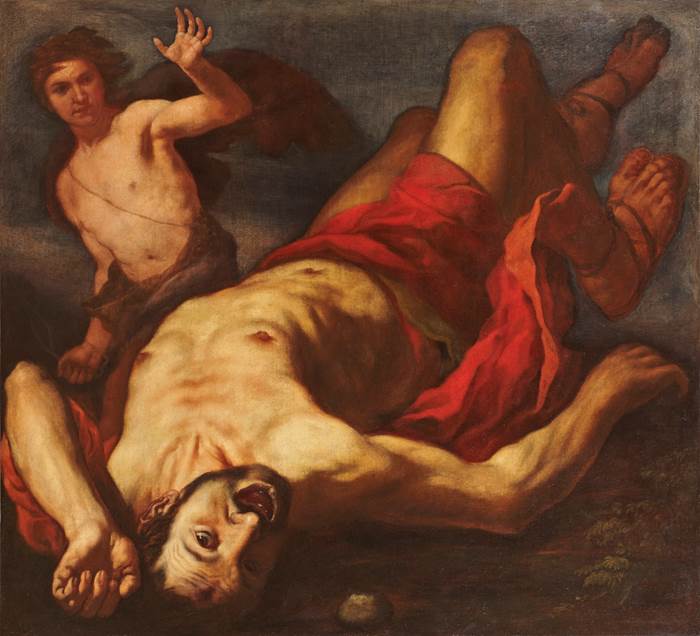 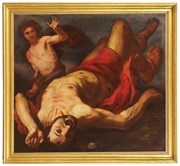 The image represents one of the best-known episodes from the life of David (Samuel 17: 48-50): the combat between the young shepherd and the giant Goliath that was to define the beginning of David’s rise to greatness.
The Philistine giant’s body lies along a diagonal that crosses the entire composition, as he screams in pain and shock, struck by the stone that has brought him down. Sling in hand, David pauses before the symbolic, lethal outcome – the beheading that would transform the shepherd boy into a glorious victor. The artist has laid special emphasis on this part of the story, placing the stone in the foreground and compositionally accentuating Goliath’s forehead, while the dynamic gestures of the arms and swirling, voluminous red drapery add to the general movement of the piece, creating new lines of tension around the tight close-up of the giant’s body. The studied sense of perspective – to suggest as best one could a figure tumbling out of the picture – implies a composition projected from the start as a ceiling decoration. Such a function, not to mention the subject, recalls a celebrated precedent by Titian (1488/1489-1576) in one of his three canvases painted for the church of Santo Spirito in Isola in Venice. The great Venetian master’s David and Goliath was certainly a source of inspiration, possibly more so when these works were moved in 1656 and remounted in the sacristy of the Santa Maria della Salute, where they are visible to this day. No doubt Zanchi now had a better occasion for viewing and study – and we should point out that he was the author of a treatise on the theory of painting, and restorer – with which to inform our version of the subject. Sergio Marinelli dates the painting to very early in the painter’s career, around 1657, associating the young Zanchi’s bold brushwork with the young David’s assault on Goliath. The virtuoso execution is centred on the principal figure, and elements such as the mouth, agape in pain and stupefied by defeat, and eyes, at once incredulous and afraid, would be developed in a more ambitious way in the artist’s subsequent works, for instance The Plague of 1630 in Venice in the Scuola di San Rocco (1666) and Christ Driving the Merchants from the Temple (1667, Venice, Ateneo Veneto)1.
Zanchi came to Venice as a very young man and was trained in the style of the tenebrosi, spending time as a pupil of Francesco Ruschi (c. 1600-1661). For the devotees of this strict form of Caravaggesque painting, contact with the early work of Luca Giordano (who sojourned in Venice between 1650 and 1654) was fundamental. But Zanchi, a cultivated person and theoretician (unfortunately his treatise survives in only fragmentary form), built his style on the local figurative traditions of the sixteenth century: the freedom of handling and muted tonalities of late Titian, light as treated by Veronese (1528-1588), and the atmospheric effects of Tintoretto (1518-1594). He was fully involved in the communication of his art, opening an academy of painting in 1662, to which he was deeply committed. The painter was acquainted with fame early in his long career (he died aged ninety), no doubt for having surpassed the tenebrismo of Langetti (1635-1676) with greater suavity and narrative talent. Zanchi could also be proud of having worked for the Prince Electors of Bavaria in Munich, and – beyond Venice – in Vicenza, Treviso, and his native Este, to which he retired at the end of his life.