Kitchen Interior with Copper Ware, Octopus, and Onions on a Stone Ledge 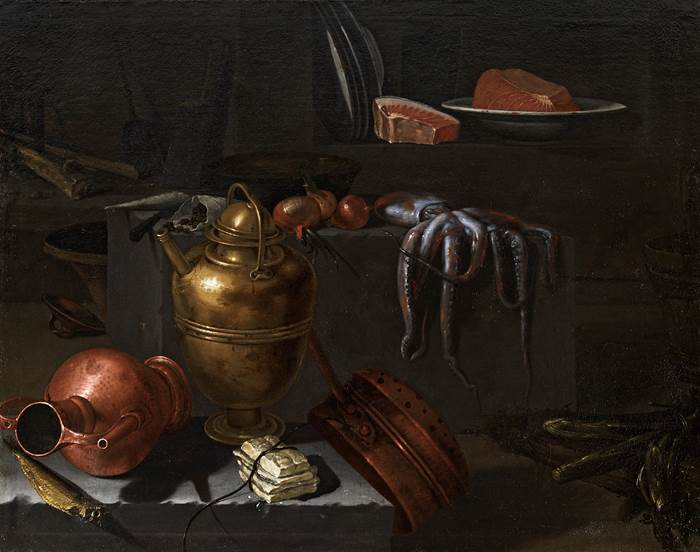 This highly poetic work appeared at auction (Christie’s, Milan, 29 November 2006, lot 81) correctly attributed to Giuseppe Recco. The composition is arranged on three levels, as implied by the quadrangular grey stone base and ledge, and by the objects themselves – herring, salted cod, onions, octopus, plates, pieces of tuna, mezzina ewers, dried fruit, and a knife. Everything on display is arranged in an orderly manner on surfaces whose presence seems arbitrarily dictated by how the provisions are posed. An ascending diagonal crosses the image, moving from the overturned ewer in the lower left corner to the piece of tuna on a majolica plate at upper right. Some cardoons, a grater, what is left of a fire (with a shovel for ashes), and a rough knife emerge from the smoky penumbral space at the edges of the canvas, suggesting a subdued quotidian element that seems contradicted by the completely cerebral construction of the fully-lit objects. The sequence of plates poised in the niche, with their abstract shadows and the absolutely geometrical sliver of light that defines them, is balanced by other equally mimetic passages, such as the skin of the octopus, and its weightiness, conveyed with prodigious skill, and the traces of oxidation on the ewer, which although only visible on close inspection, adds to the overall effect of vivid naturalism. The Kitchen Interior with Sutler, signed and dated “Gios. Recco F. 167…” (Naples, Pagano collection) has a pile of plates on the shelf, a roll of paper containing some precious spice, and nails and pot handles that cast precise, sharp shadows on the table, as in the present canvas. Likewise, a large Fishmonger datable to the 1670s in the Musée des Beaux-Arts, Rouen, with figures painting seemingly by Luca Giordano, contains pieces of pink tuna with a prominent white strip of fat – which allows the artist to create powerful touches of light along one of the composition’s diagonals – and a ewer, whose forceful position in space is underlined, as in our canvas, by the fact that it is overturned. The Kitchen Interior in the Akademie der Bildenden Künste, Vienna, signed and dated “Gios. Recco 1675” contains sprouting onions above the mantelpiece that seem scorched by the bright and vigorous fire burning in the hearth. Finally, the Kitchen Interior with Fish, signed “G…e Recco F.” (formerly London, Matthiesen Gallery) – with its system of stone blocks, the sideways arrangements of fish, and pots and metal covers balanced here and there – is perhaps the composition that most closely resembles our canvas; but whereas we believe it to be datable to the 1670s, ours belongs to the preceding decade. The blocks of stone found in Spanish paintings, and typical of Recco, appear sporadically in the work of other Neapolitan genre painters, though usually more connected with the narrative, setting the scene in a precise context. The large canvas with Saltwater Fish and Oysters by Giovan Battista Recco in Besançon, signed “G. B. Recco”, displays its fish on high blocks; but Giovan Battista Ruoppolo also made use of this motif in his early masterpiece with Fruit and Vegetables in a Landscape, formerly with the Galleria Sapori in Spoleto and now in a private collection.