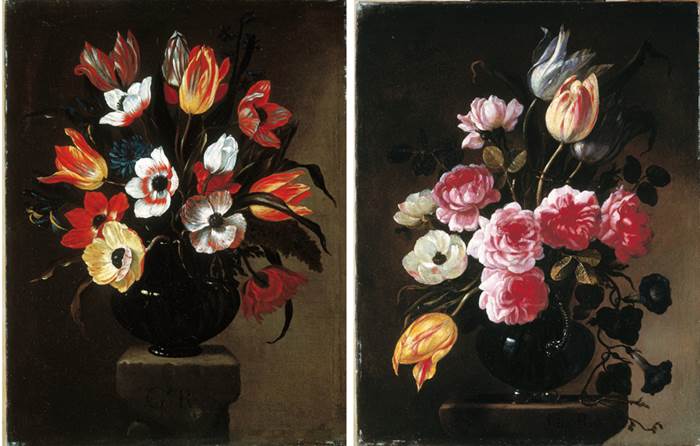 Messina, Lazzari D’Alojsio collection, inventory no. 370-371, as indicated on the labels and wax seals with their name and emblem on the backside of each canvas.

These two paintings were most likely purchased very early on by the Lazzari D’Alojsio family of Messina; the family was originally from Naples. The back of each canvas bears a label and wax seal with their name and emblem.
Giuseppe Recco rarely painted vases of flowers without surrounding them by other objects such as glasses, musical instruments, or stemmed plates piled with sweets. Here the cabbage roses with their deep red centers are gathered around the lip of the vase, reminding us of Porpora but also, perhaps, of Abraham Brueghel (1631-1697) and Jan Fyt (1611-1661). The roses are complemented by erect tulips towering above them, with the silvery reflection of one tulip reflected on the blue vase.
There are only about ten similar pictures by Porpora. At the exhibition of still life painting organized by Mina Gregori (2002-2003), Middione suggested placing these two pictures in the artist’s early maturity, especially considering a comparison with the Cut Tulips in a private collection. De Vito, too, felt that the parallels with Paolo Porpora suggest an early dating1. This echoes the statement by the biographer De Dominici, who stated that the artist began his career with flower painting: “attese a dipingere i suoi bei quadri [...] facendo dapprima molti quadri di fiori, e da noi si veggono molti suoi vasi in misura perlopiù di tre palmi per alto”2.
The simplicity of the subject may well have been imposed by patron, rather than a specific “stylistic phase” of the artist; Recco is known to have painted bouquets of flowers at different times in his career. The high stone pedestal that appears in two other of Giuseppe’s Vases of Flowers (published as Giacomo Recco by Causa)3, as well as the use of Neapolitan-style coloured glass vases4, and with the archaic compositional style, all recall the work of Antonio Ponce (1608-1687). The Spanish influence was widely felt in Naples especially between 1675 and 1687 during the period of two important Viceroys: first the Marchese de Los Velez, Viceroy from 1675 to 1682 – indeed Recco was “the painter of the Marchese de Los Velez”5; and then the Marchese del Carpio, Viceroy from 1683 to 1687. The latter inherited still lifes by Van der Hamen (1596-1631), Juan De Espinosa (documented 1628-1659) and Labrador (documented 1630)6 from his father. Del Carpio planned to create an academy of Spanish painters in Rome, but the project failed due to lack of support from the Spanish court7.
The Spanish character of the two pieces might have come from a collector of Spanish still lifes who wished to acquire a comparable “Neapolitan” work, and perhaps – like today – this brought with it questions of economy. Archival research also confirms that such collections of paintings could reflect a collector’s individual taste and sense of order: in the important seventeenth-century Spanish collection of Domingo de Soria Arteaga, a painting of grapes by Labrador is related not only thematically but also stylistically to one by Bonzi (1576- c.1636) of a similar subject8. Finally, the influence of Luca Forte is also felt in the curl of the tulip petals, which overlap one another like thinly-hammered metal, and in the dazzling light that defines their form.