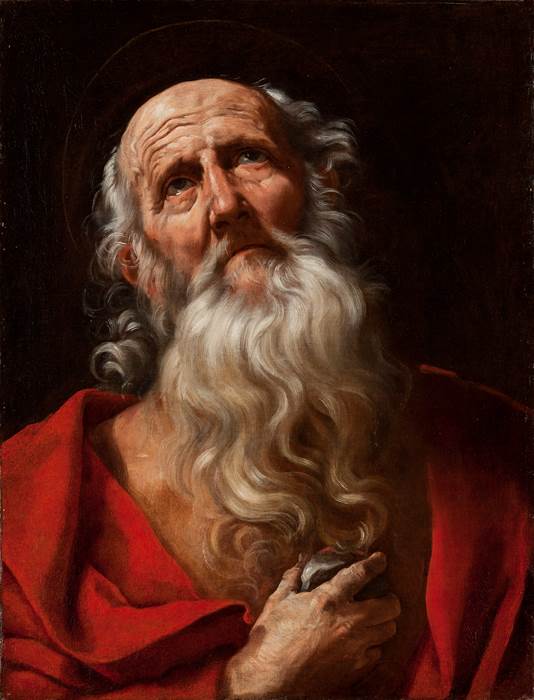 Daniele Benati considers this new addition to the oeuvre of Guido Reni as an important rediscovery, as he noted in the catalogue of the 2005 Christie’s sale in London.1 Since then, divested of the thick layer of yellowed varnish that covered the powerfully expressive figure, it has regained all its splendour, likewise convincing Erich Schleier of the great Bolognese master’s authorship. Since our publication of 2012, Daniele Benati has pointed out the existence of an engraving by Jean Couvay (published by François Langlois, konwn as Ciartres) after our Saint Jerome, naturally reversed with respect to the original; and this very print is cited by Cesare Malvasia.
Saint Jerome is depicted here as a penitent hermit, beating his breast with a stone to harden his spirit against temptations of the flesh. The representation is based on the four years the scholar spent in the wilderness after converting to the Christian faith. It was on this occasion that the Doctor of the Church acquired his knowledge of Hebrew, which he later used to translate the Bible into Latin.
The expression in the saint’s upturned gaze conveys an inspired sense of pathos. The potent modelling of the figure, emerging from the sombre background, from which it stands out by means of the sculpture-like red cloak, is a tour de force. The description of soft, broken folds recalls the ample draperies of the Apostles Peter and Paul (1605-1606; Milan, Pinacoteca di Brera), conceived in the same way so as to enhance how the figures contrast with the darkness. The artist’s youthful style is reflected in the painterly freedom of handling, especially fluid in the hands and the great flowing beard and locks of hair, as well as in the swiftly-rendered stone. Carefully-studied light is mainly applied to the face: the saint seems bathed in his faith, and the sense of spirituality is accentuated by the bust-length format.
Daniele Benati and Erich Schleier agree that the work was painted early in the artist’s career. Benati believes that our Saint Jerome can be dated to after 1605, while Schleier dates it to between 1606/1607 and about 1610; in other words both art historians place it during the artist’s Roman sojourn. Reni arrived in Rome at the end of 1601, and in 1605, he paid early tribute to Caravaggio (1571-1610) in the Crucifixion of Saint Peter (Rome, Vatican Picture Gallery) painted for Cardinal Pietro Aldobrandini – a grand altarpiece dedicated to Caravaggesque naturalism. This is the language used in our Saint Jerome, at a point when Reni, struck by the revolution brought about by the great Lombard painter, aimed to approximate his style as closely as possible. The skilful use of chiaroscuro supports the figure’s expressive and monumental aspects. This inclination towards the most modern approach to art – that of Caravaggio at the peak of his fame – was original, and is distinct from that of his fellow Bolognese painters, the Carracci and their pupils Domenichino (1581-1641) and Albani (1578-1660). In a certain sense, as Benati already pointed out in 2005, Reni followed this revolutionary path so as to better detach himself and proclaim his independence, leading to an individual artistic personality, that of the “Divino Guido”, meditated on Raphael (1483-1520) and seeking to recreate his art.2
For Erich Schleier, after Reni’s brilliant Roman debut, our painting stands between the Martyrdom of Saint Catherine of 1606/1607 – the dating is Stephen Pepper’s – in the Diocesan Museum, Albenga and about 1610, by comparison with the frescoes in the altar area of the Chapel of the Annunziata in the Palazzo del Quirinale.3 Quite rightly, Daniele Benati notes the presence of an ideal tension in our saint, a world of perfection and supreme beauty that was to find its ultimate flourishing in the Massacre of the Innocents (Bologna, Pinacoteca Nazionale), a painting sent in 1611 to Bologna, destined for the church of San Domenico.
Reni’s sojourn in the Eternal City was in fact a period of intense activity, as we may read in his account-book for the period 1609-1612, published and commented on by Pepper.4 This manuscript also casts light on the perfect mastery of his craft – one of his notes states that he had painted a head of Saint John the Evangelist over the course of one evening.5 His principal patrons at this time were the most prominent of all, especially Pope Paul V Borghese (1550-1621), for whom he worked in the Vatican in 1607 and subsequently in the Palazzo del Quirinale and the Cappella Paolina of Santa Maria Maggiore (1609-1610) – his most admired works.