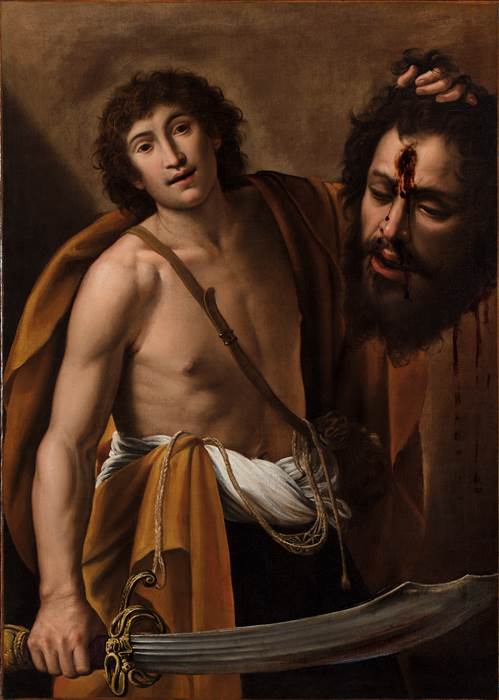 Bologna, Publio Podio collection (according to an inscription stamped on the back of the canvas, the picture was attributed to Carlo Saraceni [Pulini, 2001]); private collection.

Published by Massimo Pulini in 2001, our David Holding Goliath’s Head marks continuing progress in the rediscovery of this Lombard artist’s oeuvre, initially brought to light by Roberto Longhi, who identified the Doubting Thomas, signed and dated 1612, in the Roman church of San Tommaso ai Cenci.1 Vermiglio’s body of work has grown significantly since then, and in 2000 he was the subject of a monographic exhibition in Campione d’Italia, which assembled the research carried out during preceding decades.2
Our composition recalls the celebrated precedent by Caravaggio (1571-1610), also a Lombard artist who like Vermiglio came to Rome in his youth, and by whom we know two versions of the subject, one in the Borghese Gallery, Rome, the other in the Kunsthistorisches Museum, Vienna. When Vermiglio arrived in the Eternal City – at least by 20 February 1604, when he was residing with a mysterious master, the Perugian painter Adriano da Monteleone – Caravaggio was already active there, and the latter’s Borghese David and Goliath may be dated between May 1605, when his patron Scipione Borghese arrived in Rome, and May 1606, when he had to flee the city to avoid being arrested for murder. No doubt Vermiglio had the occasion to study these innovative works, and to reconsider and appropriate them, thus also confirming the success of Caravaggio’s approach; the inspiration continued after his return north, probably towards the end of 1620, since he married Violante Zerbi in Milan in 1621.3
The basic composition uses Caravaggio’s canvas in the Borghese Gallery as its starting-point: the young Biblical hero is shown half-length, holding the enormous sword (almost a sabre) with which he had severed the head of the giant Goliath, which he holds up in his left hand, grasping it by the hair. While Caravaggio portrayed himself in the features of Goliath, with open eyes a realistic face, Vermiglio shows us a giant’s head with half-closed, unseeing eyes, placed nearly at the level of David’s head so as to give emphasis to the achievement without insisting too much on the aspect of combat. There is no victor’s gaze over the vanquished, and the young David’s powerfullymuscled arms, needed to hold both head and sword, contrast with his clean-shaven face, in which one can still see the contentment and innocence of youth, in spite of his great tour de force.
Our painter has resolutely aimed for a restrained level of drama, putting the accent on decorum. Attention is given to the descriptive details of the sling and the decorated pommel and handguard of the sword that crosses the foreground. The background is defined by a distinct diagonal line of shadow, revealing fidelity to the language of Caravaggio, also visible in the crimson blood-streaks that lend the scene its naturalism. Soft lighting and bronze tonalities, modulated by lighter tawny browns, surround the protagonists with warm colour.
We know of two other autograph versions of this composition, both dated by scholars to the period after Vermiglio’s return to Lombardy, where he as a successful practitioner of “quadri da stanza” in the Caravaggesque mode, painting both for religious orders and private patrons, as we may see in his three large canvases in the Pinacoteca Ambrosiana, Milan.4
Biographical data on Vermiglio, discovered, transcribed and commented by Maria Cristina Terzaghi for the exhibition in 2000, offer a vivid sense of an early seventeenth-century artist’s life in Rome: in 1605, the painter was arrested for illegal possession of a weapon, in 1606 he was involved in a street brawl, and once again in 1611 – in short, a fertile and realistic context for the pictorial revolution begun by Caravaggio.5