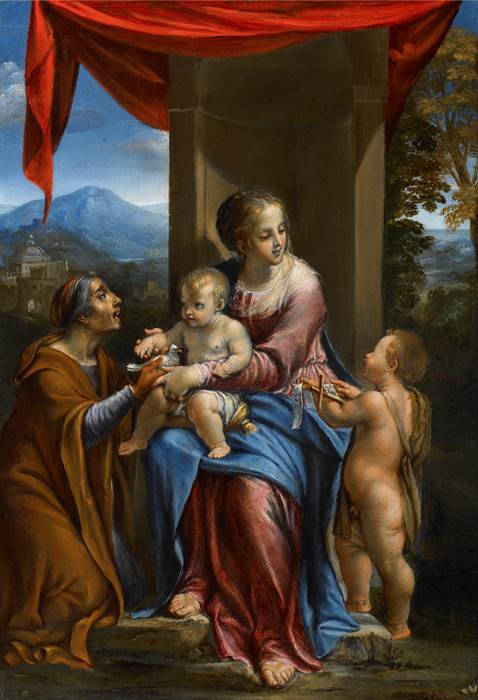 This highly colourful and delicately painted little panel, only illustrated in small-scale black and white in Anna Ottani’s pioneering article on Angelo Caroselli (1965), has recently re-emerged and was promptly published by Daniela Semprebene (2011). However, contrary to what is stated by the latter, our panel does not bear the monogram “A” below the feet of the young Baptist. In addition, as regards iconography, the elderly saint with the covered head, who could easily be confused with Saint Anne, is here associated with John the Baptist, and is thus more likely to be his mother, Saint Elizabeth.
The scene is a delightful playlet, and has the tone of an intimate conversation: Saint Elizabeth supports and gently leads the hand of the Christ Child towards the dove, while on the other side of the composition the young Saint John indicates the words “Ecce agnus dei”, inscribed on a scroll, to the Virgin, who sits enthroned under a canopy. The pyramidal group is placed in an open-air setting, and the vistas at left and right lead to distant azure horizons. The evident neo-Venetian resurgence in the artist’s style is particularly appropriate for the creation of such quadri da stanza. Anna Ottani very rightly pointed out Caroselli’s penchant for a more romantic sort of Caravaggism, which evolved on the Roman scene in the years after 1630 and also characterizes Caroselli’s Prayer of the Prodigal Son (Rome, Palazzo Spada, Consiglio di Stato), which belonged to Vincenzo Giustiniani.
Roman by birth, the artist enjoyed most of his career in the Eternal City, and is documented as a member of the Accademia di San Luca between 1604 and 1636. He nonetheless made two journeys away from Rome: one to Florence, relatively briefly, between 1605 and 1606, or perhaps in 1610 – a year when no documents attest to his presence in Rome; the other a longer sojourn in Naples from 1616 to 1623, as confirmed by Neapolitan documents recently published by Marta Rossetti1. This extended absence has a bearing on the question of Pietro Paolini (1603-1681) and his apprenticeship with Caroselli. Paolini came to Rome in 1619 but it is now clear that he could not have made contact with our artist before 1623, unless he joined him earlier on in Naples. Caroselli is an eclectic painter, and it is still hard to establish a clear chronology of his work as regards both style and subject- matter, not to mention his interest in necromancy and the magic arts, which represents one of the most intriguing sides of his talent2.