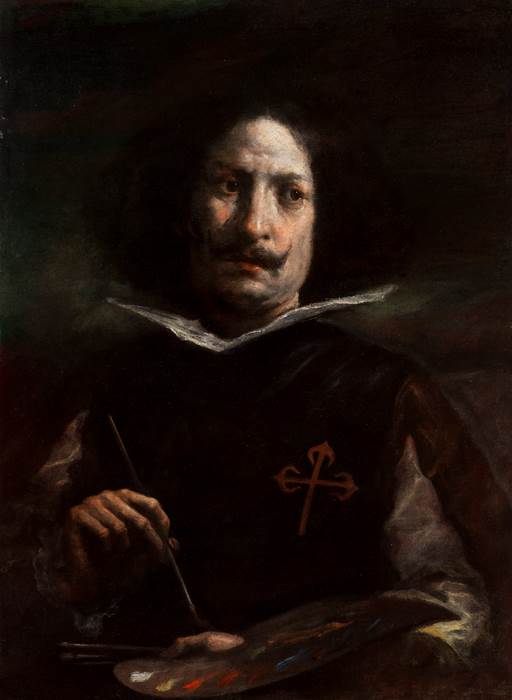 This surprising Portrait of Diego Velázquez, his gaze captivated by what he is painting, as he emerges from a dark background holding palette and brushes, has been attributed by Marco Tanzi to the Cremonese native Pietro Martire Neri. Credit goes to Tanzi for taking the artist’s oeuvre out of oblivion, throwing light on his training and retracing his career, including the professional relationship, not to mention friendship, he had in Rome with the prestigious Sevillian painter represented in the canvas before us.
Neri was trained in Mantua under the tutelage of Domenico Fetti (c. 1589-1623), whose workshop he attended, and whose paintings he copied. Then he returned to Cremona, where we see him already drawn to portraiture. After a first, brief sojourn in Rome, he spent time once again in Lombardy, where he was active in Cremona, Mantua (carrying out commissions for the Gonzaga), Pavia and also Milan, where he worked for very prominent families such as the Borromeo and the Counts della Riviera, a branch of the Sfondrati family. Subsequently he moved permanently to Rome, where he lived from October 1647 until his death in 1661. We know little of his activity in the Eternal City, although he was certainly in contact with the principal figures of his time such as Diego Velázquez and Alessandro Algardi (1598-1654), while evolving within the circle of artists who worked for Pope Innocent X Pamphilj. His election in 1653 to the rank of principe of the Accademia di San Luca proves his renown.
We should point out, as Marco Tanzi has done, that Neri’s fame is tied in part to the fact that he collaborated with Velázquez on the Portrait de Cristoforo Segni (Kreuzlingen, Kisters Collection), the majordomo of Innocent X, if we are to believe the inscription on the back of the canvas1. In any case, we find the names of the two painters associated once again in the Portrait of Innocent X (Rome, Doria Pamphilj Gallery), executed by Velázquez during his second Roman sojourn between summer 1649 and November 1650 – a work that was to be copied and indeed expanded by Neri in a signed Double Portrait of Innocent X and a Prelate (Real Monasterio San Lorenzo del Escorial).
In Rome, Pietro Martire Neri thus appears to be an experienced painter of portraits; and one wonders how ours came into being. Even though it might seem inspired by the self-portrait in Velázquez’s Las Meninas (1656; Madrid, Museo del Prado), it could have been conceived with the sitter present, between 1649 and 1650, or instead – as suggested by the presence of the Cross of the Order of Santiago, awarded to Velázquez in the last months of his life – in 1660-1661, thus becoming one of Neri’s last works. Unless, according to a final hypothesis, it was executed after 1656 (the date of the Meninas) and the cross was added later, as doubtless also happened with the Meninas, and as would be the case if our first proposition were correct. Given the absence of archival documentation, it is hard to establish a firm date within the decade 1650-1660/1661. The face is modelled in clear, luminous tonalities, highlighted with rare, precious accents of colour – red and pinks – as found on the palette. To bring together the whole picture, the artist appears to have used all his skill, especially in the background, to paint over underlying pigments: X-radiography has now told us that there existed a prior, multi-figure composition with no apparent connection to the finished portrait.