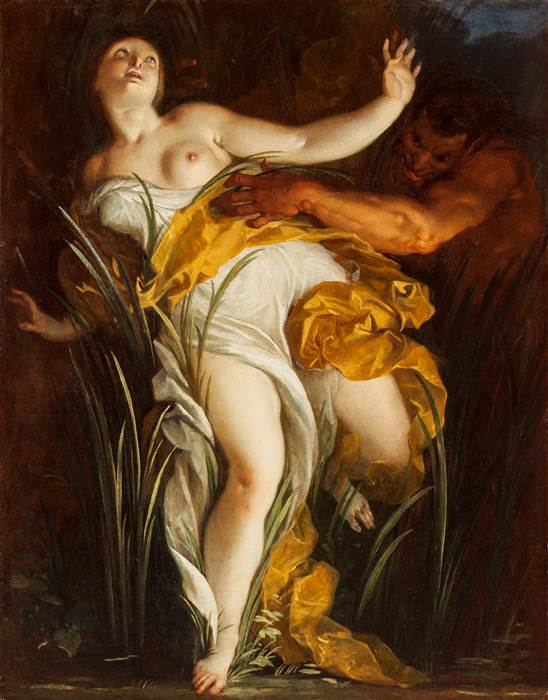 Born into a family of artists, Louis was the son of Michel Dorigny (1617-1665), who had married one of the daughters of Simon Vouet (1590-1649), and brother of Nicolas Dorigny (1658-1746), who was also a painter and printmaker. Although enrolled in the Académie Royale de Peinture et de Sculpture in Paris in 1663, he was disappointed when he only received a second prize, and on his own initiative set out for Italy; he had learned his craft from his father, and then from Charles Le Brun (1619-1690). A lengthy peregrination was to take him from Rome to northern Italy, where he settled in Verona in about 1690. His renown as a fully-rounded artist and talented fresco painter led him to Vienna, where he worked in the palace of Prince Eugene of Savoy. The work before us is a depiction of a mythological episode, the story of Pan and Syrinx, as told by Ovid (Metamorphoses, I: 691). The Latin poet situates the story in Arcadia, where the satyr-god sets out to pursue the nymph Syrinx, who is accustomed to "elude the satyrs chasing her, and the other sylvan deities". She flees from Pan "who thought he had her in his grasp", and as she finally reaches the river Ladon, "she begged her sisters of the water to transform her", as announced by the reeds in the foreground, symbolizing her fate and her ultimate appearance. The dynamic gesture of Pan, seizing Syrinx with one hand and parting the reeds with the other, and the close-up, di sotto in su viewing point, emphatically set the picture within a spectacular Baroque aesthetic that is typical of the artist's style. The contrast between the milky flesh of Syrinx and the tanned tonality of the satyr, whose body melds into the background from which he emerges, lends a marvellous rhythm to this pair of figures.