The Offering to Venus 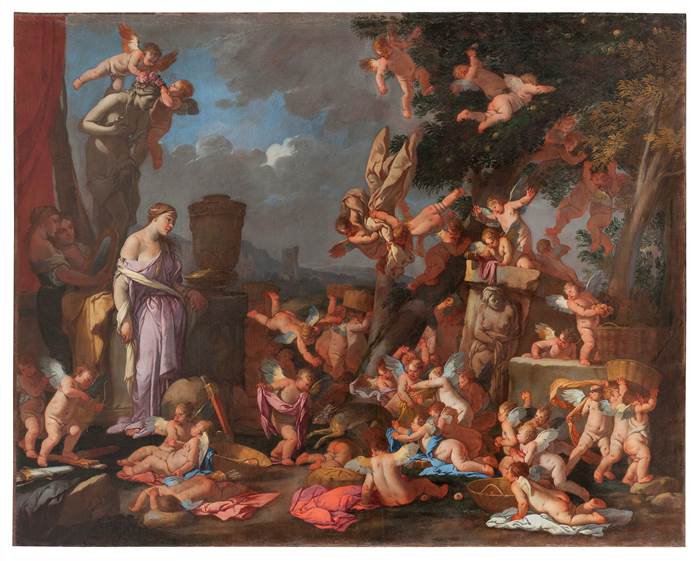 Probably Publio Podio Antichità, Bologna; the property of a Bolognese family since about 1930, and by descent to the present day.

A mythological theme much favoured by the artist, the Offering to Venus offers a pretext for a painting in which femininity and childhood hold pride of place. Set against a landscape background, this ambitious composition presents Venus, goddess of nature, female beauty and love, surrounded by her nymphs and a multitude of little love gods who have set aside their quivers so as to harvest apples, an activity reflecting nature’s bounty. The story is enhanced by an allegory of fertility, as suggested by the hare, a motif already adopted by the artist for a canvas in the Carlo Donzelli collection in Florence.1 These groups of young children exude a joie de vivre that stands in contrast with the melancholy character of the nymphs and goddess. This kind of ambivalence recurs in two other representations of the subject, with the same horror vacui, and dated by Pilo to a fairly late period in the artist’s career, around the 1660s.2 Carpioni’s idealized scenes are also marked by crystalline light, which brings out full, intense chromatic harmonies, here principally in the pinks and mauves. The antique stone relief and vase, the lengthy piece of red drapery at left, and the frieze-like unfolding of the foreground scene all illustrate Carpioni’s classicism, inherited from his apprenticeship in the early 1630s with Padovanino (1588-1649). This inclination was developed through a profound study of early Titian (1488/90-1576) – the Titian of the Bacchanals, originally in the collection of Alfonso d’Este in Ferrara, then in Rome until 1638 before they were sent to Spain (now Madrid, Museo del Prado) – not to mention his awareness of works in the same genre, but less explicitly gleeful, by his French contemporary Nicolas Poussin (1594-1665), probably known through prints by Pietro Testa (1611-1650).