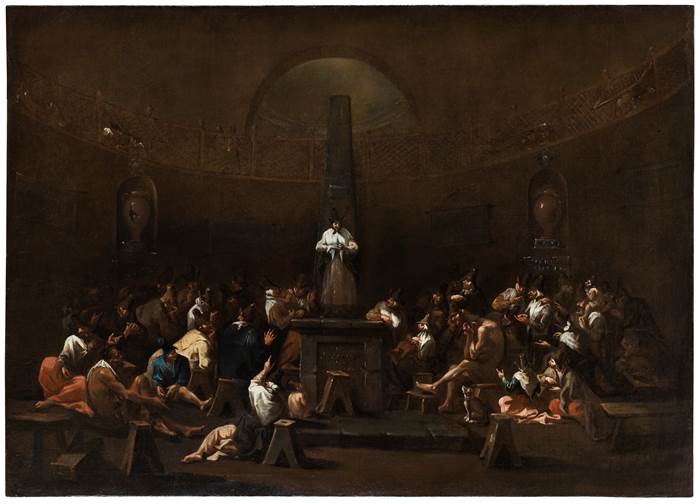 Fausta Franchini Guelfi has rightly pointed out that Magnasco’s biographer Carlo Giuseppe Ratti makes no mention of Quaker meetings – had he misunderstood the subject, perhaps? – although the artist treated them on several occasions (1). Ratti does refer to compositions with synagogues, one of Magnasco’s favourite subjects, and in a way Quakers fitted into this theme, since their community was allowed to hold meetings in Jewish places of worship. That Magnasco took up this religious topic early on is proved by the date 1695 on one of his compositions (see Related works). According to Fausta Franchini Guelfi, he was the only European painter to appropriate this rare iconography, together with the Dutchman Egbert van Heemskerk (1634/5-1704), who sojourned in London (2). In the present instance, our artist was more likely inspired by a print by Jacob Gole (1660-1737) after the Dutch painter (3). In eighteenth-century France the existence of Quaker societies was known because the first four Lettres philosophiques by Voltaire (1694-1778), published between 1733 and 1734, are dedicated to them. One learns there that women could preach (as in our painting), and that heads resting on hands in meditation (as occurs with a number of our figures) means that the faithful silently await divine inspiration that will allow them to speak out, whatever their level of inspiration. Quakers have no priest, and they personally care for the poor, who appear to form the majority of the assembly depicted here; they wear clothing that reflects their Christian humility, and are easily recognizable by their tall black hats. Women, men, children and dogs make up Magnasco’s disparate assembly, while others listen to the sermon behind the trellised screen above. The disconcerting male nudes on either side of what serves as a pulpit seem like ignudidrawn directly from the realm of sculpture. The composition is centred around a grand obelisk symmetrically flanked by two imposing vases; the monument had great significance in pagan times, being dedicated to the Sun and thus symbolising Truth. Indeed light catches the summit of the monument, perhaps to suggest the Quakers’ belief in “inner light”. This is a particularly significant addition with respect to the compositions by Heemskerk, proving that Magnasco was well aware of this doctrine, in which the profession of faith was founded on Truth. Quakers refuse to swear any oath, even in a court of law, where they confine themselves to answering yes or no; this partly explains why so many of them were merchants. Quakerism arose in England in the mid-1600s and spread very quickly under the guidance of two charismatic leaders, George Fox (1624-1691) and William Penn (1644-1718). We should not rule out that Magnasco had direct awareness of the movement, and in fact Stefano Villani has demonstrated that Quakers met in 1657 in Livorno and in 1672 in Milan, that is, just twenty-three years before our painter took up the subject in the last years of the seventeenth century (4). In Tuscany, Quakers were welcomed by the Jewish community, which allowed them to preach in their temples. This last detail would explain the architectural framework of our picture, which is more monumental than those in Van Heemskerk’s canvases. Fausta Franchini Guelfi dates this composition to about 1720. Limiting his tonal range to browns and greys, with precise touches of luminous blue or red highlights, Magnasco never abandons the swift, graphic idiom that typifies his handling of paint. This original and anti-conformist iconography bears witness to the painter’s ability to offer depictions of contemporary events that lay at the heart of the debates surrounding Enlightenment thought in the mid-1700s. This extremely talented and prolific artist was the son of the painter Stefano Magnasco (c. 1635-1672). After his father died, Alessandro left Genoa for Milan, where he became a pupil of Filippo Abbiati (1640-1715) in about 1677. He soon established himself as a figure painter, and began his career, sometimes working independently and sometimes collaboratively, as author of figures in works by landscape painters – Antonio Francesco Peruzzini (1646/1647-1724), Crescenzio Onofri (c. 1630-1713/1715), Marco Ricci (1676-1730), and Nicola van Houbraken, and in Florence, the Frenchman Jean-Baptiste Feret – or alongside the painter of ruins Clemente Spera (c. 1662-1742). In 1703, he is mentioned in Florence with Peruzzini, and he worked for the Grand Prince Ferdinand de’ Medici (1663-1713), painting refined pictures such as the Hunting Scene (now in the Wadsworth Atheneum Museum of Art, Hartford). It was certainly in Florence that he had occasion to study the prints of Jacques Callot (1592?-1635) and thus focus on the graphic qualities of his figures, which stand mid-way between the art of the Genoese painter Valerio Castello (1624-1659) and that of his Venetian friend Sebastiano Ricci (1659-1734), or later Francesco Guardi (1712-1792). In 1708 he was back in Genoa, where he was married; he stayed in contact with his native city, where his mother and brothers lived, throughout his life. He returned to Milan in 1709, and his name appears regularly in the records of the Milanese Academy of Painters until 1719. A commission from the Austrian Governor of the city, Girolamo Colloredo-Mels, ensured his success, and opened doors to the great Milanese families, notably the Archinto, Casnedi, Visconti and Angelini. As his biographer Ratti states, after returning to Genoa for the last time in 1733, Magnasco was still very productive in his final years (5).