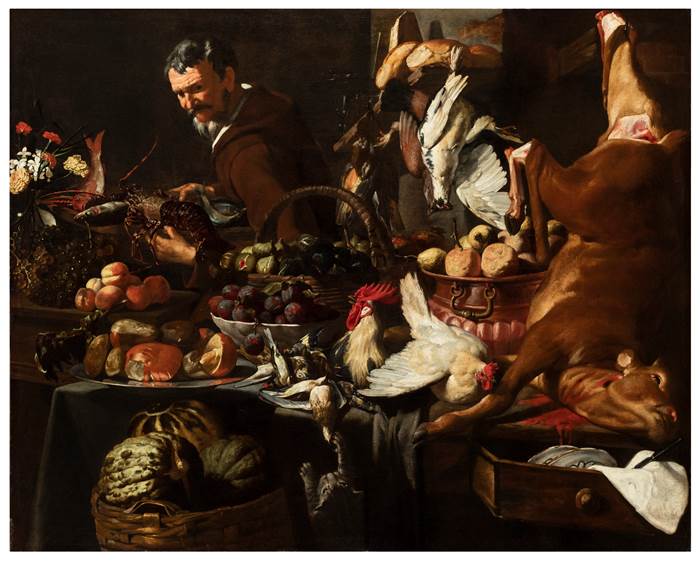 This artist, most probably a native of Liège, as indicated by his name, Italianised as “Liegi” or “Legi”, was active in Genoa, according to the biographer Raffaello Soprani (1612-1672).1 It is from Soprani that we learn that Giacomo was a Fleming and the pupil and brother-in-law of Jan Roos, known as Giovanni Rosa (1591-1638), and that he painted flowers, fruits and animals.We are also informed that he died in Milan after having moved there for health reasons. This meagre biographical information was enough to keep the artist’s name alive, as he might otherwise have fallen into oblivion. We owe the reconstruction of his oeuvre to Anna Orlando, whose article of 1995 in Paragone gave the painter a fairly complete group of pictures, assembled around two compositions in French public collections that had long been attributed to Liegi: the Young Man in a Pantry and the Cook with Game in the Musées des Beaux-Arts in Bordeaux and Orléans, respectively2. To this day, no signed painting by the artist has emerged, even if the older literature affirms as much3. In any case, as with Jan Roos, it seems clear that Liegi collaborated with other painters for the depiction of figures in his paintings.
The artist’s contribution to the still life tradition is characteristically Baroque: the various elements in our picture are arranged both along the horizontal of the table and the vertical of the birds and the calf, hanging from one leg and almost filling the height of the canvas. This is a masterful exploration of subjects, ranging from flowers and fruits to animals, both furred and feathered – nature vive juxtaposed with nature morte ; and each dish, whether pewter, ceramic or copper, creates sparkling reflections described with generous brushwork. The wealth and complexity of the composition tends to make us forget the fragile crystal vase containing freshly-cut flowers, in the far left background. The kitchen servant has gathered fish and crustaceans, no doubt in preparation for a meal. In the foreground at right, the open drawer, with a knife balanced on the edge, reminds us of the painter’s Flemish culture, as does the small cat in the middle, pawing playfully at the dead bird whose head hangs over the edge of the table.
The painting – which bore an attribution to Castiglione in 1933 – was ascribed to Liegi by Piero Pagano, its last owner, and was published as such by Ezia Gavazza in 1990, followed by Anna Orlando.
It is well known that Flemish artists were active in Genoa during the first half of the seventeenth century. Foremost among these were the De Wael brothers, Lucas (1591-1661) and Cornelis (1592-1667), originally from Antwerp, who took in Anthony van Dyck (1599-1641) in 1621; but also Jan Roos, another Antwerp native, who had been trained in the workshop of Frans Snyders (1579-1657).