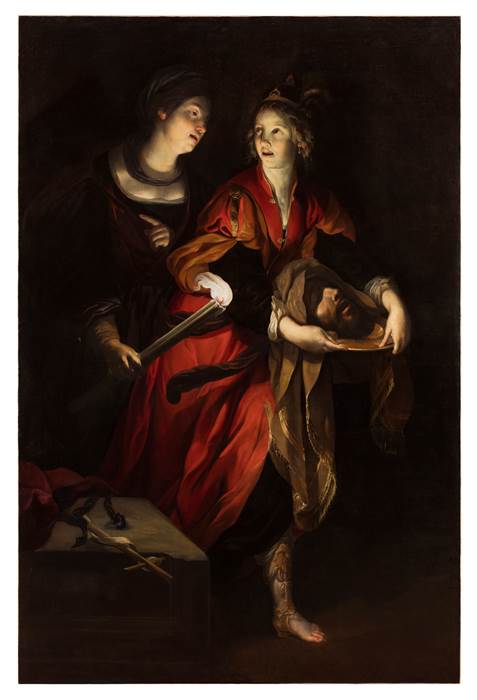 
Soon-to-be published by Gianni Papi, our composition with Salome and the Head of Saint John the Baptist forms part of the Caravaggesque phase of the Sienese painter Francesco Rustici, which began in the period 1618-1619 during his first Roman sojourn. The presence of the candle as sole source of light adopts the formula developed by the Utrecht artist Gerrit van Honthorst during his time in Italy, between 1610 and 1620.
Without the cross and scroll placed next to the shackles and chain of the saint’s imprisonment, the image could be mistaken for a depiction of Judith with the Head of Holofernes. The painting is striking for the elegance of the life-size figures, the complementary tones of Salome’s red cloak and the golden-brown drapery covering the Baptist’s severed head, and the description of light on the faces of the two women as they emerge from the penumbra. The dramatic effect is further enhanced by the knowing look exchanged by Salome and her servant.
The theme was treated by Rustici on several occasions, and this canvas was no doubt executed during his Roman sojourn, in about 1624-1625, when he produced a painting of similar size and subject for the Florentine Cardinal Lorenzo Magalotti.