Portrait of a Lady with a Dog 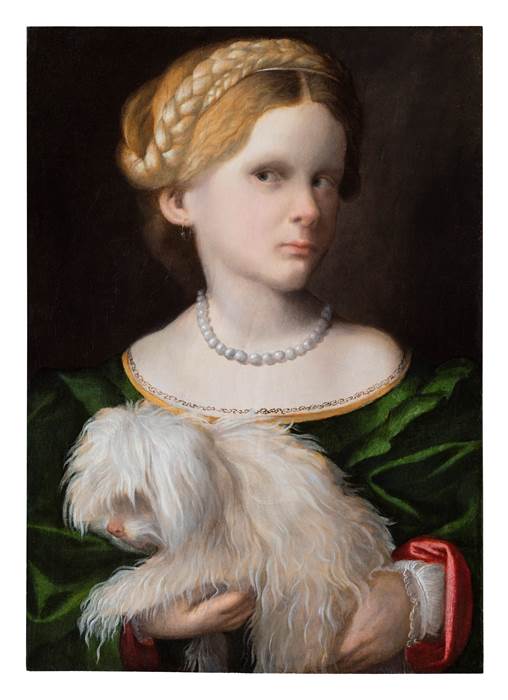 In 1669 the painting entered the collection of the Earl of Pembroke and Montgomery, at Wilton House, Salisbury (according to the 1731 catalogue of the collection, it was a gift, with seven other pictures, from Cosimo III de’ Medici, Grand Duke of Florence [1642-1723] when he stayed at Wilton House in 1669); their family sale [The Earl of Pembroke and Montgomery and the Lord Herbert], Christie’s, London, 22 June 1951, lot 16 (as “Correggio”); private collection; in 1955 the painting was exhibited in the Paul Larsen Gallery, London (see Apollo, June 1955); private collection.

This fascinating Renaissance portrait has been returned to its proper context since 1957, when Mina Gregori connected it with sixteenth-century Cremonese artistic culture. She assigned it to the oeuvre of the rare painter Gian Francesco Bembo, in the period after 1520, that is, after the Portrait of a Gentleman (Galeazzo Pallavicino?) in the Museum of Fine Arts, Budapest1. The painting owned by the Earl of Pembroke (1731) was already at his family seat, Wilton House, in the second half of the seventeenth century. In fact the catalogue of the collection states that it was part of a group of eight Italian pictures donated by the Grand Duke of Tuscany, Cosimo III de’ Medici, during his journey through England in 1669: “The following Eight were a Present to Philip (the Father of Earl Thomas) from the Duke of Florence, who when Prince of Tuscany, had been with him at Wilton three or four weeks”. The last point here, regarding the duration of Cosimo III’s sojourn at Wilton House, is contradicted by the official manuscript account of the journey compiled by Magalotti and published by Anna Maria Crinò.2 The visit to the residence of the Earls of Pembroke – Philip Herbert, Fifth Earl (1621-December 1669), father of Thomas Herbert, Eighth Earl (1656-1733) – took place during a single day, at the urging of Philip Herbert, who wrote to Cosimo III inviting him to stay at Wilton House. The evidence suggests Cosimo had not planned such a visit, only being in the area to visit Stonehenge, where he went on the morning of the following day before proceeding to Wilton House. Once there he and his entourage took lunch, admired the paintings by Van Dyck and walked through the magnificent gardens before returning to his inn in Salisbury that evening. In the absence of archival documents referring to this prestigious Grand Ducal gift (although the traditional telling of the story recurs in every catalogue of the Collection), we should not rule out its veracity.
Our research in the Medici archives has not proved that our Portrait of a Lady with a Dog formed part of the Grand Ducal collections, yet this is an alluring hypothesis, since a recently rediscovered document confirms that Bembo sojourned in Florence in 1509.3 Indeed on August 8, 1509 a contract was signed for renting a house he shared with the Spanish painter Alonso Berruguete (c.1488-1561). Bembo’s link with the Medicean capital is therefore a real one, as is his awareness of the work of Raphael (1483-1520), which here inspired him in a very personal and anti-Classical manner, conveying his reaction to the portraits by the great Renaissance master.
Our artist adopts a very modern compositional format and shows great audacity in the free brushwork used to describe the coat of the dog, while remaining very restrained in the description of the lady’s hair, the brilliance of the pearls, and the black trim of the fine white chemise she wears. The sitter’s three-quarter profile is marked by her intense and precisely directed gaze, while her bust is shown frontally. The angular hands, reflecting the artist’s typically geometrical approach, blend into the hair of the lady’s canine companion, and the ample drapery of her clothing is described using two complementary colours, green and rose- pink.
The fortune this portrait achieved on English soil – though the identity of the sitter still remains a mystery – is attested to by the existence of a replica, no doubt painted much later, which has survived in the collection of the Dukes of Northumberland at Alnwick Castle.