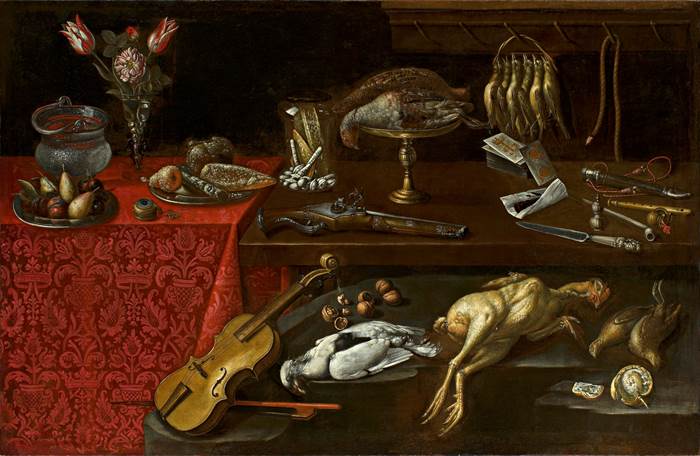 One could think of this Spanish-inspired still life as a bodegón of the Po Valley, with its sequential display of elements, as real as they are symbolic: fruit, flowers, confectionery, a watch with a compass, game, a pistol, a hunting-knife, a string of tobacco wrapped in writing-paper, playing-cards, castanets, a pipe, a snuff container, a pennywhistle, a lit fuse, a peeled lemon, a brace of quail, a capon, some walnuts, a pigeon, and a splendid violin and bow.

The canvas was once in the Gonzaga di Vescovato collection, and was recorded in the mid-1940s as the property of Prince Gianmaria in the family castle of Grumello del Monte near Bergamo. It must have been painted in Lombardy, probably between 1625 and 1628, for reasons of both style and history; 1628 marks the death of Pirro Maria Gonzaga di Vescovato, in whose Bergamasque palazzo a picture of the same subject is recorded soon thereafter, in an unpublished document. Its archaism and provenance from the area between Milan, Cremona and Mantua indicate the authorship of a local specialist, and everything we know points to Panfilo Nuvolone.

The composition is centred around a raised dish with a brace of partridge, recalling – albeit in a more elegant and less crowded way – Nuvolone’s painting formerly with the Galleria d’Orlane, a Chased metal dish with game birds. This formed a pair with a picture representing a Metal dish with peaches, gourds and figs, formerly with Silvano Lodi. However, the description of the game birds and larks hanging from the rack in the work before us our is much more detailed; indeed the details are very carefully described throughout and no doubt reflect the painter’s study of Francesco Codino (the German Franz Godin, active in northern Italy after 1620), but are surely also the result of first-hand observation rather than the pedestrian emulation of other painters’ animals. While the central dish and its partridges – a true painting within a painting – is enough to lead to an attribution to Nuvolone in his maturity, the overall composition has startling features that distinguish it from his other still lifes, offering us a unique, particularly complex and intellectual work. The first and most evident element lies in the size of the canvas (98 x 150.5 cm), substantially larger than Nuvolone’s published paintings, and thus the most extensive and varied of all his still lifes.

What strikes one immediately is the absence of a harmonious or systematic arrangement. Rather than gazing at an overall scheme, we see a sequence of distinct images, miniature portraits of objects that share a great attention to detail. Nuvolone’s penchant for reproducing nature ‘in piccolo’, and the correct rendering of flowers, fruit, utensils, birds, weapons and musical instruments in a coherent ensemble is here made available for an intellectual journey taken by a beholder with cultivated tastes. The setting created by Nuvolone on three distinct planes expresses multiple examples of arcane symbolism, perhaps not all decipherable in a straightforward way by someone in our own time and comprising an unusual allegorical message no doubt requested by the patron.

An initial and immediate interpretation conveys the concept of vanitas, an iconographic theme that had its greatest success at the beginning of the 1600s, directly expressing the dictates of the Counter-Reformation theology, of which Panfilo was a rigorous spokesman in his sacred works. The intrinsic significance of this disparate outlay of material goods would thus be an invitation to reflect on the fleeting nature of human life, on its close connection with death, and to heed the warning that its pleasures must be enjoyed sparingly. The earthly fortunes of an individual such as the patron of this painting – and it is tempting to think it might have been Pirro Maria Gonzaga himself – are laid out in harsh comparison with their inevitable end.
Rather than conveying an intimidating memento mori through an explicit depiction of a skull, so frequent in seventeenth-century European iconography, Panfilo Nuvolone prefers a more delicate game of suggestion, achieved by a theatrical sequence with veiled meanings. The artifice of the different levels of display strengthens the concept of vanitas by proposing a concept of human existence divided into three phases, an unusual naturalistic interpretation of the theme of the Ages of Man treated a century earlier in the Veneto by Giorgione and Titian.

The composition reads clockwise from the top left, concluding with the violin. It begins with life-affirming elements, placed on a table covered with a red damask cloth: fruit, both simple and candied, swollen with ripeness, some prominent tulips, a cabbage rose and a red rose still in bloom, in an elegant crystal vase, full of water like the glass jug beside it. The repeated decorative motif of the rich damask echoes the cut flowers, accompanied by the coronet of a marquess – symbols of a young life born and experienced in a wealthy, privileged environment. The rich  pocket watch, with its winding key, conveys the first of several warnings that reflect on the transience of earthly beauty and the inexorable passage of time, adding an invitation to choose a morally honest path, as indicated by the presence of the compass on the watch-casing.

The large wooden table placed at an intermediate level on the right displays a jumble of objects with varied uses, suited to moments of the daily life of an adult nobleman: more confectionery, a pistol, a metal dish with the two partridges, playing cards, a hunting knife with a chased handle, its sheath, a pair of castanets, a pennywhistle, a pipe and a snuff container, and some writing-paper wrapped around an unidentifiable brown substance, probably tobacco waiting to be cut. Behind these, hanging from a rack, are six larks and a lighted fuse – another symbol that expresses the maxim tempus fugit.

On the lowest level, a simple stone surface, the painter expresses himself through the classic vanitas theme in its strictest Borromean context – that of the memento mori. We see a brace of quail, a plucked golden capon and a white pigeon. This seemingly marks the end of amorous passion (the quails), of wealth, health and fertility (the rooster is transformed into a vacuous capon), and of the journey of life in this world (the pigeon). Beside them lie some walnuts, three whole and two open, one of which, turned black, is no longer edible, and an orange, completely dried up, its wedges still joined but detached from the inside of the hardened peel. The moral admonishment ideally closes with a splendid violin, the musical instrument most frequently associated with the theme of passing, lying obliquely in the foreground on the lowest stone surface, with its red-brown bow.
Quite apart from other symbolic meanings attributable to these objects, or to the composition as a whole (including an allegory of the five senses) a study of the individual pieces contributes conclusively to the painting’s date and Lombard provenance, with reference to the cultural traditions of the area encompassing Milan, Cremona, Mantua and Brescia – precisely the milieu of Panfilo Nuvolone in the first quarter of the seventeenth century. The descriptive accuracy of the objects, particularly those to which he draws attention through colour (the fabric), central location (the gun) or foreground placement (the violin), leads us to propose that they were all copied from originals of the time, probably owned by the painter’s aristocratic patron.