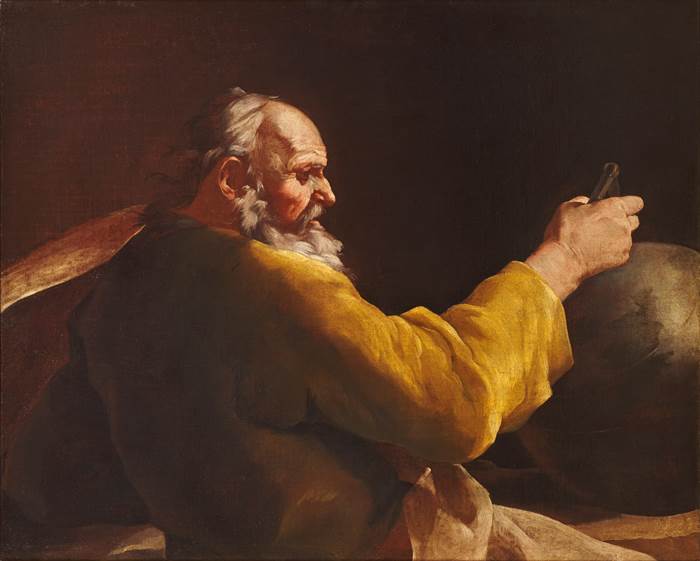 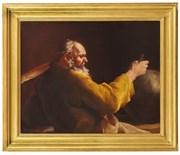 This venerable figure is represented deep in thought as he makes calculations on a terrestrial globe, his head in profile and his powerful right hand holding a pair of compasses.
Every aspect of the painting led Alessandro Morandotti to identify its author as the Ticinese painter Giuseppe Antonio Petrini: the choice of iconography, the composition, details of style and colour combination, and a taste for chiaroscuro. The painter’s oeuvre is peopled by philosophers, astronomers and geographers, but also individuals from Biblical and ancient history, all forming an ideal gallery of learned men who observe terrestrial and celestial globes, as well as investigating human thought. Such paintings echo the earlier seventeenth-century tradition of depicting erudite men, launched as a painterly genre in its own right by Jusepe de Ribera.
As is evident in this canvas, Giuseppe Antonio Petrini holds a place in the lineage of artists from the Canton of Ticino who embraced the naturalism of Caravaggio. Our painter’s immediate predecessor in this respect was Paolo Pagani, and his deeper roots are found in the work of Giovanni Serodine and Pier Francesco Mola, even though Petrini’s choice of tonalities and light reveals his penchant for the age of Tiepolo.
In its quality of invention and imaginative use of colour, this picture resembles other well-known works from the artist’s maturity, notably the Moses and the Burning Bush (Lugano, Museo d’Arte), Saint Luke Painting the Virgin (Zürich, Kunsthaus) or the Scientists at Work in a private collection. The basic reference for a study of Petrini remains the catalogue of the Lugano exhibition of 1991.