The Angel of the Annunciation 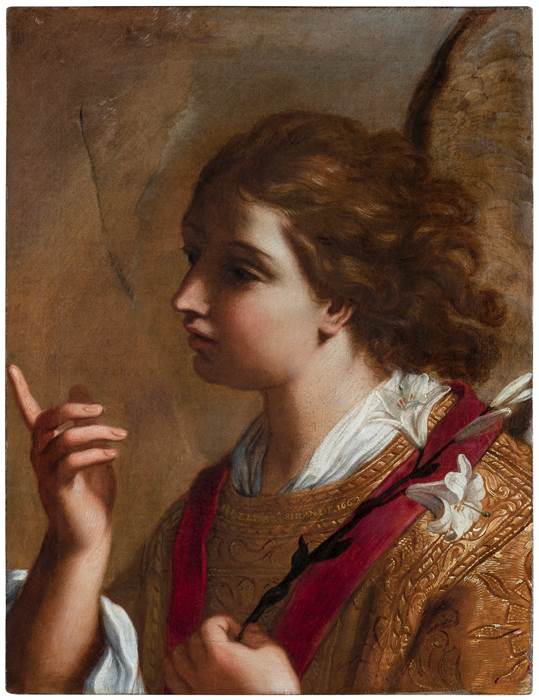 
The rediscovery of this Angel of the Annunciation represents a significant addition to the oeuvre of Elisabetta Sirani, heralded as “Pittrice Eroina” (heroic painter) in mid-seventeenth-century Bologna by the biographer Carlo Cesare Malvasia (1616-1693) who frequented the Sirani workshop and admired and praised the talent of the very young woman artist.
Elisabetta belonged to a family of painters and learned her craft in the workshop of her father, Giovanni Andrea (1610-1670), where she was regarded as a child prodigy, producing her first altarpieces at the age of seventeen1. In order to avoid confusion with works by her father, she added her signature to much of her own output, and always distinctly so, thereby asserting her wish to be considered as an entirely independent artist. Signed in capital letters and dated 1663 along the neckline of the Angel’s chasuble, our canvas is no exception: it was painted during the last stage of Elisabetta’s life, only two years before her premature death at the age of twenty-seven, following a sudden episode of bad health (and not as a result of poisoning, as legend has it). In little over a decade, she had succeeded in producing a substantial number of paintings – about two hundred – as well as founding a drawing academy for women, frequented by Bologna’s cultivated and learned talents, and training pupils such as Ginevra Cantofoli (1618-1672). Elisabetta herself was known for her wide-ranging culture and her excellence in all fields, including music; her grand public funeral represented a moment of glory for Emilian painting.
The “Nota delle pitture fatte da me Elisabetta Sirani” (list of paintings made by me, Elisabetta Sirani) transcribed by her contemporary, Count Malvasia, includes the following entry: “Una testa del naturale d’un Angelo per compagno d’una testa, che già feci d’una B. V. di simile grandezza, non sapend’io il padrone” (a life-sized head of an Angel, to accompany a head I had made of a Blessed Virgin [Mary] of the same size, not knowing who the patron was). This was published in 1992 by Fiorella Frisoni as in an unknown location2.
We suggest here that this refers to the Angel of the Annunciation, newly rediscovered and no doubt separated by the vicissitudes of ownership from the accompanying image of the Virgin. It is interesting to note that the commission came from an intermediary or dealer who left the painter uninformed as to its patron’s identity, and that she did not provide the information, as was the case with other clients, including the Medici family. In a summary history of the seventeenth-century Bolognese art market, Adelina Modesti3 concluded – not only with reference to Elisabetta Sirani and her family – that it was one of the most thriving sections of the city’s economy. Often, intermediaries acted within a private sphere of friends, family or acquaintances. In our case, the Angel was certainly intended for an individual seeking a companion piece for a previously-painted Virgin Mary, expanding the iconographic programme. These smaller pictures were made for private devotion, a category which represents about one half of our artist’s catalogue.
In 1663, the year of our painting, Elisabetta’s style was becoming mellow, and she favoured small-scale works, following Correggio (c. 1489-1534) in the treatment of light and evanescent pigment, as seen here in the Angel’s wings, barely suggested. This figure, the essence of delicateness, stands out against a pale brown background, a tonality echoed more potently in the bronzes of the chasuble or the touches of reflection in the hair. With his raised index finger and half-open mouth, this winged creature seems clearly to be the Archangel Gabriel addressing the Virgin Mary, as indicated by the lily stem in his left hand. The broad shadows, very emphatic on the face, recall the Portrait of Vincenzo Ferdinando Ranuzzi as Cupid (Warsaw, Muzeum Narodowe), another painting of 1663, also on a small scale and only slightly bigger than ours.
The ascendancy Elisabetta Sirani gained in Bologna during the decade 1655-1665 was crucial for the passage from Classicism – represented by Guido Reni (1575-1642), who had been her father’s teacher – towards a manner of painting that was more Baroque, more refreshed and indeed more modern.