The Virgin with the Sleeping Child 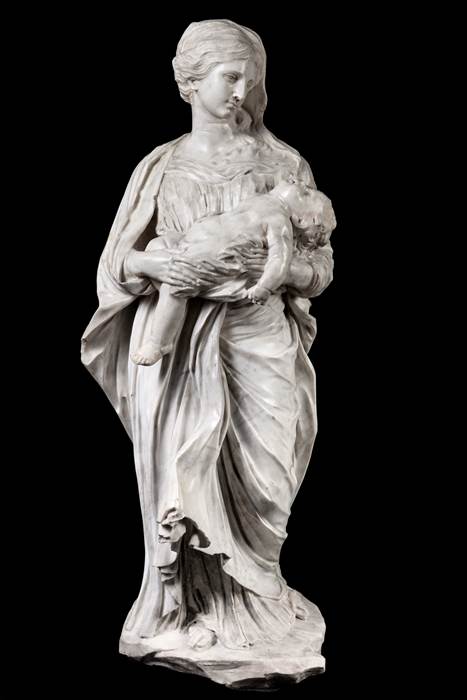 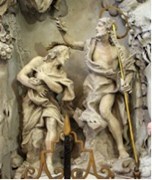 
The author of this wonderful Madonna is one of the protagonists of Genoese Baroque sculpture. He must not be confused with the other sculptor Domenico Parodi, the son of Filippo Parodi and twenty years younger. The two sculptors had no family relation, with their surname still being today one of the most common in Genoa.
By examining this statue and some others by Domenico Parodi (namely the Baptism of Christ in the church Santa Maria delle Vigne and the Assumption of the Virgin in Santa Maria di Castello, both churches in Genoa), the richness and sophistication of his culture, dense with echoes of Roman art and of Pierre Puget, will become evident, and so his originality and inventiveness. He is a sculptor that has long been unjustly overlooked.

The Virgin is standing on a rocky base, with her left foot slightly raised and the left leg bent. This position gives an elegant dynamism to the composition and influences the way in which the elaborate drapery falls on the lower part of the body and on the ground.
Mary holds in her arms, with characteristically elongated hands, she holds her child, naked and asleep. Her body is covered by a long tunic, with a mantle over her shoulders and a veil on the head, which then falls over her left temple and down to the chest, to the opposite shoulder. Her hair is sculpted in long waves, and an air of deep serenity in her glance, looking away from the baby Jesus in a moment of peace and meditation.
The back of the statue is left deliberately unfinished, with the insertion of a steel rod, both signs of the original display inside a niche. It seems very likely that the statue had to be raised from the ground, given the foreshortening of the drapery and of the facial traits of the Virgin. However, we do not know the historic provenance of the statue, which in the 20th century has been part of two of Italy’s most prestigious private collections, the Gualino collection of Turin and the Zerbone collection of Genoa.

The Canesso Virgin with the Sleeping Child is known to the studies for many years and has been exhibited and published numerous times. It has been attributed also to Filippo Parodi and to Pierre Puget (erroneous attributions that, however, grant for the high quality of the sculpture), but today the main experts on the field, including Lauro Magnani, Daniele Sanguineti, and the present writer, agree that it is a work by Domenico Parodi.

The earliest source of information on the sculptor is the biography written by Carlo Giuseppe Ratti in two versions (1762 and 1769). It is full of mistakes, including the dates of birth and death of the artist, or the name of his father, given as Anton Maria, but actually Giovanni Antonio. It also contains narrations that cannot be verified (they may even be true), as the accidental death of the artist during an alchemy experiment to create gold1. However, Ratti says that Domenico was in Bernini’s workshop, an unlikely event but an indication of the fact that he had been in Rome and that he studied the masters of the Baroque (Bernini, but also Algardi, Duquesnoy, and Ferrata, the latter being so important in the formation of Genoese sculptors in Rome). A document of 14 March 1682 shows Domenico Parodi living with his wife Apollonia in Rome, near Porta Pinciana. Apollonia Parodi was the daughter of Domenico Piola, Genoa’s most important painter. This means that through marriage Parodi was related to Piola and to the other great master of painting in Genoa, Gregorio de Ferrari, who was the husband of a sister of Apollonia.
Domenico Parodi’s extensive knowledge of Roman Baroque sculpture is evident when we compare the Canesso Virgin with François Duquesnoy’s Saint Susanna of 1629, the masterpiece of 17th century classicism in Roman sculpture. The traits of the faces and the inclination of the heads are so close that we could say that the Saint Susanna is the prototype of the Canesso Virgin, an idea that is reinforced by a comparison of the position of the body of the two figures, especially of their legs and of the left arm bent at ninety degrees and stretched over the hip and towards the front. The draperies of the two statues are instead quite different, because the classicistic robes of the Saint Susanna are replaced by a more dramatically baroque concert of folds and creases that seems to be indebted to, for example, Pierre Puget’s Immaculate Conception of 1669 (Genoa, Palazzo Lomellini).
As we said, the Canesso Virgin was considered at one point a statue by Filippo Parodi and it certainly shows the influence of him, for example when we look at the signed Sleeping Christ Child of 1675 in the Cleveland Museum of Art.
Another marble statue by Filippo Parodi which has a conceptually similar structure to the Canesso Virgin is the Immaculate Conception of the church of San Luca in Genoa, dating to around 1680. In fact, the striking resonances between the Canesso Virgin and the two aforementioned statues by Filippo Parodi could indicate the approximate date of our statue, the period between 1670 and 1680.
Two documented works by Domenico Parodi help us to further develop the conversation on his Roma culture and on his relationship with Filippo Parodi, a relationship that should be seen as collaboration, especially in the works that Filippo carried out in Padua in the later part of his life, from 1685 until his death in 1702. The Chapel of the Relics in the Basilica of St. Anthony in Padua is an articulate and complex sculptural and decorative project entrusted to Filippo Parodi and carried out with the cooperation of some Genoese sculptors like Giacomo Antonio Ponzanelli, Angelo de Rossi, and Domenico Parodi.
The relationship with Filippo Parodi is clear also when we look at the Immaculate Conception from San Luca and compare it to Domenico Parodi’s Assumption of the Virgin in Santa Maria di Castello (see photo above). There is a shared sense of dynamism, of drama, almost of theatre, in which the religious image becomes an opportunity to stage a grand scene and to display a wonderful mastery in the treatment of a marble, a hard material that is shaped under the tools of the sculptor like a soft and docile piece of wood.

Finally, the best known sculpture by Domenico Parodi is the Baptism of Christ in the Genoese church of Santa Maria delle Vigne (see photo above).
It is unique in the landscape of Genoese sculpture and extremely rare in Italian sculpture in general, in the sense that there are so few groups of figures carved in the round and in monumental size. It is more than a sculpted altarpiece (like the celebrated examples by Algardi in Rome), it is a more ambitious project, requiring skill, ability, and courage because of the technical difficulties.
Domenico Parodi resolved it by drawing from his knowledge of Roman sculpture and especially of Algardi’s Baptism, a bronze version of which was in the collection of the Franzone family of Genoa and is today in Cleveland.