Two male heads: a study for the Marriage at Cana 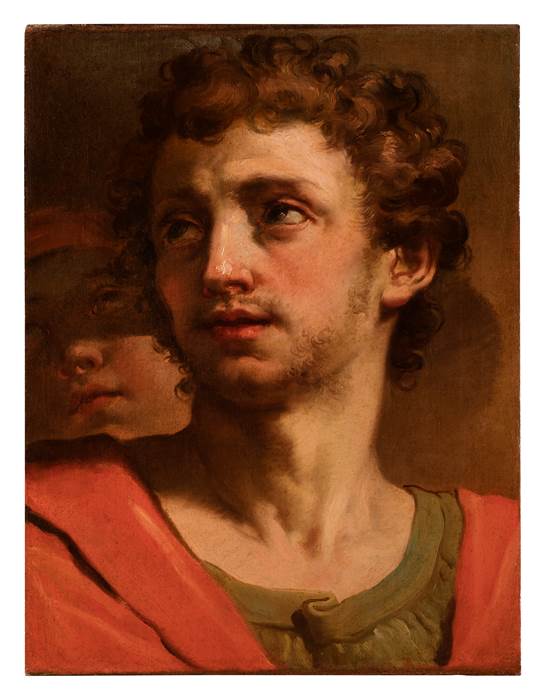 Bologna, private collection since the beginning of the twentieth century.

This refined study of a pair of heads – a young bearded man seen in three-quarter view, and a boy behind him, glimpsed in foreshortening from below – is unquestionably by the great Bolognese painter Gaetano Gandolfi, one of the leading figures of European art in the eighteenth century. More specifically, the canvas is a painted modello for two of the figures in the large-scale Marriage of Cana, housed in the Pinacoteca Nazionale in Bologna, a crowded scene that Gandolfi composed for the refectory of the Lateran Canons of San Salvatore.
We know from early sources that this unusually grand work1 was much admired and noted in contemporary journals, remaining on display in the artist’s workshop for over a year, for public and connoisseurs alike;2 and we know that it was installed in the great refectory for which Gandolfi also painted an oculus, in the centre of the room, with the image of God the Father Blessing, silently interacting with Christ in the middle of the canvas. The local scholar Marcello Oretti wrote in his Diario Pittorico that on 21 April 1776 “the whole Refectory was unveiled … with the grand Painting of the Marriage at Cana in Galilee, the celebrated work by Gaetano Gandolfi, and he put his name to it”,3 adding that the work was completed in 1775. Already an opera famosa, then, when it was set in place, this painting was the result of a lengthy creative process that resulted in a complex, carefully articulated composition, with groups of figures set into a solemn architectural scene. Gandolfi’s work evoked precedents from great earlier traditions, especially Veronese, familiar to him from his sojourn in Venice in 1760, as well as local artists such as Bonone, or indeed Federico Barocci, a painter much admired by the Carracci, whose oeuvre was fundamental for our painter. Arranged within this Baroque stage set, Gandolfi’s numerous figures of the wedding guests include some who are aware of the miracle of water being turned into wine. Among these, at the heart of the momentous story, is the young bearded man on the left, his arm outstretched as he draws the attention of his turbaned neighbour to the figure of Christ, who is giving an order to the servants.
Following the precepts of the Carracci – the finest seventeenth-century Italian school of painting, according to Luigi Lanzi – Gandolfi was accustomed to creating his compositions through a constant flow of drawings, sketches, and models, thus developing every expression, pose and gesture to which he gave life over fifty years. His career stretched from the 1750s (the years of Pope Benedict XIV, who so fostered the arts of disegno), when he trained at the Accademia Clementina (the Bolognese Academy of Painting, Sculpture and Architecture), to the nineteenth century, when the ever-rolling waves of late Baroque ancien régime painting finally hit the arid shoals of the Neoclassical culture; he died in 1802.
Our canvas is part of a series of compositional and figure studies that Gaetano probably began in 1774, identified over the years in both public and private collections.4 As we have said, it is a preparatory work for the young man whose prominence in the complex scene has given rise to the popular notion that he could be a self-portrait of the artist, just as the young woman with flowers in her hair, on the far right, has been identified (in an equally unfounded way) as Giovanna Spisani, Gaetano’s wife. An image of the latter has also survived in a modello representing her and her male neighbour.
The picture before us is therefore an important addition to Gandolfi’s oeuvre, presumably datable to 1774, and it principally shows a key character in the Biblical story, not only for the compositional reason given above but because he can surely be identified as the groom, bearing in mind the prominence given him by the artist, with his elegant green tunic and sumptuous red mantle, as well as the fact that he is seated next to the bride, the beautiful young woman in the foreground who is the only figure with a complex hairstyle, complemented by her wide-sleeved dress and bejewelled, ermine-lined cloak.5  For such a significant and challenging work – “the masterpiece ... according to all the Professors ... the famous picture of extraordinary size, containing I know not whether fifty or sixty figures, all masterfully designed, arranged and painted”6 – Gaetano produced small canvases with the faces and attitudes of the many players in the Gospel story, always with excellent results, as proved by our painting and others. As regards pictorial finish, the freshness of handling here, and the frank, direct manner of description conveys the quality of a brilliant talent and a temperament entirely devoted to painting.
Gateano Gandolfi was known for his extraordinary arie di testa, or character studies, as they were known, depicting anonymous individuals from life. These were eagerly sought by cultivated collectors from the very beginning of his work in this genre, during the 1760s,7 their appeal lying in the painter’s innate capacity to study nature and his rare ability of responding with empathy to the mood of his sitters. The painting studied here can be considered on that level, if we consider the concrete rendering of the young man’s absorbed expression, amazed as he is by the miracle unfolding before his eyes, whose mystery he cannot comprehend.
This is a beautiful image, and the quality of the conception is balanced by its pictorial handling, with loaded brushstrokes giving contours and vibrant life to each form.

1 – The painting measures 530 x 679 cm, and now hangs at the top of the staircase leading to the main floor of the great Bolognese picture gallery, where it has found a permanent home after its various vicissitudes since the Napoleonic events of 1797. It has been restored several times, most recently by Ottorino Nonfarmale in 1996.
2 – D. Biagi Maino, entry in Pinacoteca Nazionale di Bologna. Catalogo Generale. 4. Seicento e Settecento, Venice 2011, p. 306, with earlier literature.
3 – Ibidem. The manuscript Cronica o sia Diario Pittorico is in the Biblioteca Comunale dell’Archiginnasio in Bologna, ms. B. 106.
4 – See D. Biagi Maino, Gaetano Gandolfi, Turin 1995, p. 370 for the three known modelletti: the older man with a turban (Los Angeles County Museum, M.82.199), the young woman with flowers in her hair and the servant holding the amphora in the foreground (both privately-owned); p. 369 for the overall sketch of the composition (Baltimore, Walters Art Museum); and pp. 79-81 for an extended discussion of these works.
5 – An early copy of the of the modelletto for the bride (the woman elegantly coiffed with pearls in her hair and a fur-lined golden-yellow mantle) recently appeared on the art market (Casalmaggiore, Galleria d’Orlane, from a Bolognese private collection): this is clear evidence of the widespread success at that time not only of the great picture itself but of the various small-scale preparatory canvases.
6 – Cited from a letter of 1785 by the Pisan N. Giusti: see D. Biagi Maino, op. cit. 1995, p. 113, no. 36.
7 – See D. Biagi Maino, Gaetano Gandolfi e i volti della scienza. La Pinacotheca Bassiana di Bologna, exhibition catalogue (Labirinto della Masone), Fondazione Franco Maria Ricci, Parma 2016.