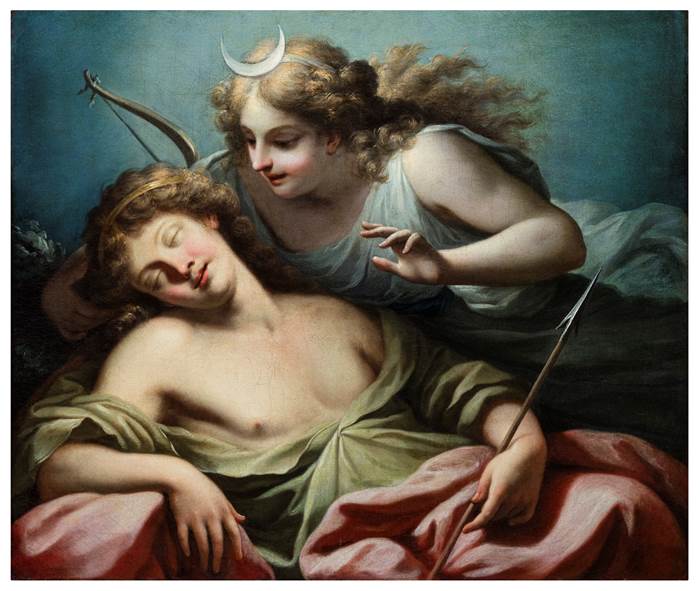 Fedele Fischetti studied painting in Naples with Giuseppe Bonito (1707-1789) in the mid-eighteenth century. Subsequently, working in a style inspired by the barocchetto, he turned towards a more classicizing vein, keeping in step with the pictorial modes then fashionable in Rome – those of Pompeo Batoni (1708-1787), Anton Raphael Mengs (1728-1779) and indeed Angelica Kauffmann (1741-1807). Nicola Spinosa deserves credit for having recognized Fischetti’s hand in this canvas, a subject embraced by the artist on several occasions during his career.

The composition is inspired by Ovid and tells of the loves of the Gods: Selene, the Goddess of the Moon (Luna, in Latin) has become infatuated with the beautiful young shepherd Endymion. She asks Zeus to plunge her beloved into eternal sleep so that he retains his youth forever. He slumbers in a grotto, and Selene comes to gaze at him every night. The crescent moon diadem she sports on her head recurs in the iconography of the goddess Diana, with whom she is often merged in the depiction of this mythological episode.


The tight, close-up framing of the composition draws us into the intimacy of this scene, silent and steeped in the dimness of the soft, vaporous night, which lends the image a dreamlike character. The greens, pinks and whites of the drapery take on pearly tones, and these lighter tonalities add a pleasant mellowness to this entranced couple. Selene seems suspended over Endymion, who is fast asleep. This canvas can be dated – again according to Nicola Spinosa – to between 1770 and 1780, during Fischetti’s period of full maturity, and can be compared to the pair of ovals with Diana and Endymion and Apollo and Daphne (Rome, private collection), or to Hymen and Modesty (Naples, Pisani collection).1

The artist was an expert in allegorical representations, and his work consisted to a great extent of grand fresco decorations, both in churches and noble residences in Naples (Palazzo Cellammare, Palazzo Doria d’Angri, et al.) or its environs, notably at the Royal Palace of Caserta, where he was active between 1778 and 1781.