Agrippina departing from Rome with the ashes of Germanicus 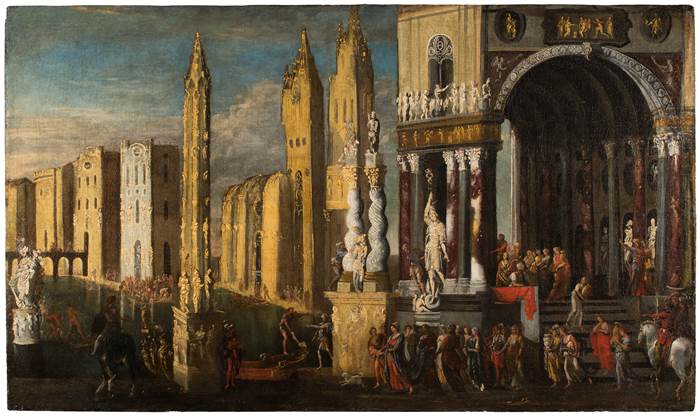 The Fantastic Visions of Monsù Desiderio, Sarasota, The John and Mable Ringling Museum of Art, February 1950.


Much loved by the Surrealists, and a special favourite of André Breton, François de Nomé was highly appreciated after the Second World War, fostered by American collectors and museums. This gradually led him out of anonymity, and away from the pseudonym “Monsù Desiderio”, which confused his work with that of Didier Barra (born c. 1590/95, documented to 1647), the true “Monsù Desiderio” who was also a native of Lorraine and active in Naples. Nevertheless, our painter has often continued to be referred to by this nickname.
The subject of the present canvas comes from Classical Antiquity: “The scene of Agrippina’s embarkation could well have been drawn from an historian of the Roman Empire such as Tacitus”, as Michel Onfray notes in his writings about the metaphysics of ruins in the paintings of François de Nomé.1 Leading the procession of figures, Agrippina is about to begin her journey to Rome, bringing with her the ashes of her husband Germanicus, who had died in Antioch in mysterious circumstances. Ahead of her, a soldier points out the way to the ship. Agrippina is accompanied by her son, the future Emperor Caligula, and by her youngest daughter Julia Livilla. A short distance behind them, a maiden carries the funerary urn.
We see no ruins here, but rather tall buildings lining the water, clearly representing “symbols of power – temporal and spiritual, secular or religious, Church or State”, according to Michel Onfray, who adds that “All forms can perish, with no exception”. A strange, unstable character emanates from the extravagant, fantasy-driven architecture, and the water lapping at the shore almost reaches the buildings themselves, threatening them. Vertical structures punctuate the composition in both foreground and background, and the historiated spire resting on a square base offers an innovative motif, as does the pair of twisted columns supporting lone sculptures rather than a roof or canopy. In all likelihood the artist’s imagination was fired by the tinted engravings by artists of the School of Fontainebleau such as Jacques Androuet du Cerceau (1515/1520-1585/1590), but also by the Flemish architect Hans Vredeman de Vries (1527-1604); no doubt the latter offered inspiration for the grand open portico at right. The composition is an ambitious one, its size enabling the artist to stretch his long procession along the foreground as it moves out of the portico, which is defined by alternating columns and sculptures in niches. François de Nomé’s passion for antiquity, which grew out of his training in Rome, is well-known.
In 1950, the author of the Sarasota exhibition catalogue proposed that the figures were by Belisario Corenzio (1558-1643), a painter of Greek origin who was active in Naples, and the hypothesis was seconded by Maria Rosaria Nappi, who noted in 1991 that they are identical to those in the Pool of Bethesda (private collection, formerly Mondolfo collection).2
In 1961, Félix Sluys pointed out that the architectural details were taken almost literally from a painting of the Arrest of Saint Peter (London, George Weidenfeld collection), though Maria Rosaria Nappi considers that work to be a replica, perhaps by an imitator.

François de Nomé’s career evolved through various peregrinations that led him from Metz to Rome in 1602, and then on to Naples in 1610. Archival documents record his sojourn in Naples until at least 1631, and no doubt well beyond that date.3 These rare points of secure chronology enable us to posit a period of training in Rome, where he was taught by a certain “Maestro Baldassare”, identified by Raffaello Causa as the Fleming Balthazar Lauwers (1578-1642), a pupil of Paul Brill (1554-1626) who had married the daughter of the French goldsmith Henry Cousin. Through Lauwers, de Nomé could have acquired a more direct awareness of the culture of Fontainebleau through the engraved architectural views of du Cerceau, not to mention those by Vredeman de Vries. The world of these Northern landscape painters, and the care they lavished on their work, would certainly prove significant in his training. Very soon thereafter, in 1610 – the date of the death of Adam Elsheimer (1578-1610) – he left the Eternal City for Naples, which also had a highly cosmopolitan attraction for artists in these years. Maria Rosaria Nappi rightly underlines that the presence there of a colony of Northern artists may have given him reason to leave Rome; among these were Jacob Isaacszoon Swanenburgh, and the German Jakob Thoma von Hagelstein – the latter was a witness at de Nomé’s marriage on 13 May 1613 to the daughter of the Flemish painter Loys Croys.4