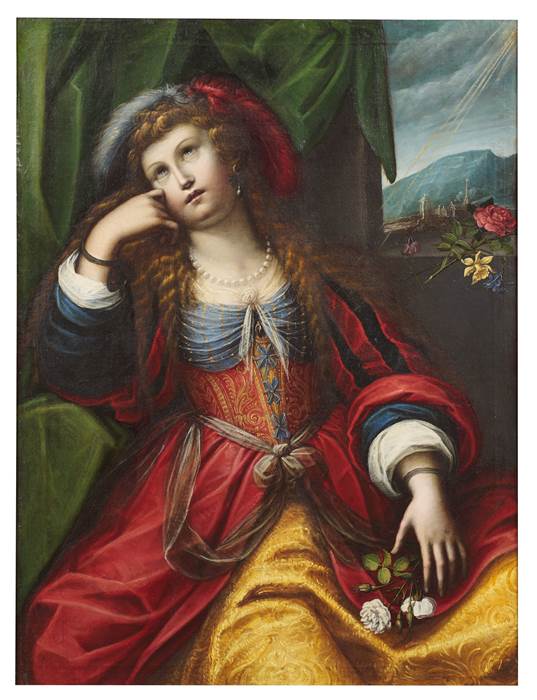 Our splendid Magdalen, depicted at the instant her conscience has transported her to a new, more mystical form of life, is a significant and unpublished addition to the oeuvre of Orsola Maddalena Caccia, a rare female artist in seventeenth-century Piedmont. She was the daughter of the painter Guglielmo Caccia, known as il Moncalvo (1568-1625),and practiced her profession first with her father and then independently, after having inherited his workshop equipment, paintings and drawings when he died. Subsequently she had a long career, and lived into her eightieth year.
Orsola has yet to be rediscovered. Like Artemisia Gentileschi she was the daughter of an artist and a leading figure among the women painters of her time, but unlike Artemisia, who was always in the limelight, Orsola chose to lead a cloistered life. Yet she earned great critical acclaim in Piedmont, even though her studio was within the walls of a convent in Moncalvo -founded by her father, who owned property there – of which she became mother superior.
Mary Magdalen is represented before her life of penitence, and thus lacking her customary attributes, the skull and crucifix. The elegant dress still reflects her worldlylife, and she is covered in jewels and coiffed in coloured feathers that offset her long, flowing hair. The painting’s secular aspect is striking: is this a portrait of a lady as Magdalen, or maybe even a self-portrait? Our artist adopted the name, coupling it with that of Orsola (Ursula) when she took her vows in the Ursuline nunnery at Bianzè in 1620, having been baptized as Theodora. As in a fifteenth-century painting of the Virgin and Child, this Magdalen is seated in a space covered by expansive green drapery, in pensive mode, her head resting on her right hand. A view onto a landscape, featuring a swiftly-drawnbut prominent church, is pierced by golden rays indicating divine presence and the Magdalen’s imminent conversion. Likewise, her upward gaze enables us to imagine a transformative moment.
The flowers, evoking a Northern European or Flemish approach and no doubt inspired by anthologies and engravings, symbolize the links between sacred and secular. White and pink thornless roses, which stand for the mystery of the Incarnation, are usually associated with the Virgin Mary; the yellow jonquil with the mystery of Easter, and thus with Resurrection; and the blue columbine symbolizes the Holy Spirit.
Orsola distanced herself from her father’s Mannerist style, becoming a specialist in the painting of flowers, which one finds either scattered through her figurative compostions or placed in vases, occasionally enhanced by fruit and birds, as true independent still lifes. Few of these paintings, exceptional in quality, have been identified, and of the dozen or so known to us, the first to be recognized (by Giovanni Romano) were the three Vases of Flowers in the Museo Civico in Moncalvo.1 In this respect, Orsola is considered by Alberto Cottino2 as the first specialized still life painter in Piedmont, especially for her treatment of the natura morta in posa genre. Her still lifes were not conceived as decorative pieces but as sacred metaphors, bearing precise symbolic value and conveying her devotion as a sister of the Ursuline Order, to which she remained faithful throughout her life.
The chronology of Orsola Maddalena Caccia’s works is truly challenging, and we would suggest here that our picture was painted between 1620 and 1630.3 Its attention to detail and vivid, sparkling colours can also be found in some of her most accomplished compositions, such as the Birth of the Virgin (Pavia, Musei Civici, Pinacoteca Malaspina) and the Saint Cecilia at the organ, with an Angel tuning a lute, and a choir of Angels (Turin, Galleria Sabauda). Her catalogue includes a number of devotional works painted for Piedmontese churches, well beyond her native region.