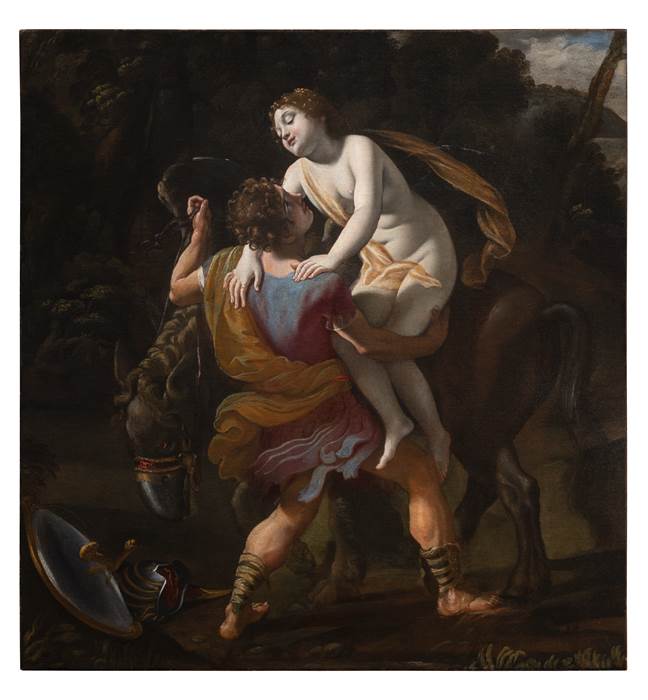 The painting represents an episode from the end of canto X and opening of canto XI of Orlando Furioso by Ariosto (1474-1533), an epic poem begun in 1505 and first published in 1516; the extensive text provided a ceaseless source of inspiration for artists. As Angelica, an eastern pagan princess, is about to be devoured by a sea-monster to whom she had been offered as a sacrifice by the islanders of Ebuda, the Saracen Ruggiero finds her tied naked to a rock while flying above her on his hippogriff (half-horse, half-eagle). He decides to free her with the help of his magic shield, which could dazzle his enemies and plunge them into sleep. Fearing that the enchanted magic ring he wears – which had the power of erasing spells and granting invisibility if it were put in one’s mouth – might neutralize the effect of his shield, he places it on Angelica’s finger, clearly visible in our composition on the index of her right hand. The presence of the ring, which after passing from one character in the story to another finally returns to Angelica, to whom it originally belonged, is important because it allows the heroine to intervene (albeit invisibly) in all kinds of situations throughout the poem.

To return to our painting: having landed in “lesser Brittany” in a “solitary and pleasant glade”, Ruggiero seizes Angelica, who has prompted his passion, helping her dismount from the curious steed. Naked and modestly lowering her eyes, she realizes that the precious ring is still on her finger. She removes it and puts it in her mouth, becoming instantly invisible and thus escaping from Ruggiero who furiously searches for her in a state of incomprehension.
This episode of the Orlando Furioso is rarely represented in painting, with artists preferring the more dramatic moment of the liberation of Angelica from the sea-monster, which echoes the celebrated mythological precedent of Perseus freeing Andromeda.

Lanfranco painted this singular moment of the narrative on another occasion, in a painting now in the Galleria Nazionale delle Marche in Urbino. 1 That composition is more horizontal, with the landscape developing into a distant body of water. There are a number of variants between the two pictures, especially as regards the addition of fluttering drapery on the protagonists and the placement of the hippogriff. As with the composition in Urbino, X-radiography has revealed a number of pentimenti that bear witness to Lanfranco’s compositional exploration. He varied the position of Ruggiero’s legs, the head of the hippogriff (initially set further back) and the upper outline, clearly visible, of the creature’s second wing, emerging from the top of Angelica’s back, which was ultimately left unpainted.
Contrasting chiaroscuro effects – Lanfranco was still indebted between 1614 and 1619 to Orazio Borgianni (1574-1616) – appear in each of these compositions, enhancing the poetry of the scene, which remains redolent of the style of Annibale Carracci (1560-1609), as underlined by Erich Schleier, who has recognized our painting in a written communication as an autograph work of high quality. Schleier emphasizes physical differences, noting the variation of Angelica’s hair colour – brown on the present canvas and more auburn in the broader version in Urbino. However, both paintings show her hair braided around her head, and this recurs, as do her slightly baby-faced features, in other compositions by the artist, notably the Angelica and Medoro (New York, private collection), datable to about 1616-1617 and therefore close in time to our picture.2 Schleier notes that Lanfranco used the same female model in all these compositions, and wonders whether they are likenesses of the young Cassandra Barli, whom the artist married in January 1616, when he was thirty-four.

Having trained at the start of the seventeenth century with the Bolognese painter Agostino Carracci (1557-1602), and then with Annibale Carracci in Rome, Lanfranco was entrusted with prestigious commissions from Cardinals Odoardo Farnese and Jacopo Sannesi between 1610 and 1620; he had already been in Parma and Piacenza between 1610 and 1612, before returning to Rome. After 1620, “Lanfranco became the most modern and important painter of the time in Rome, and highly appreciated by Pope Paul V”.3 Between 1628 and 1633 his style evolved, approaching a neo-Venetian idiom, with more fluid, airy and clear handling, as may be seen in the frescoes in Palazzo Costaguti in Rome. In 1634 he went to Naples, where he remained until 1646, receiving numerous commissions for grand altarpieces, the dome of the Gesù Nuovo and the decoration of the church of the Certosa di San Martino. He spent the last year of his life in Rome, to which he had returned in 1646.