Peaches and basket of grapes, birds and a cup and saucer 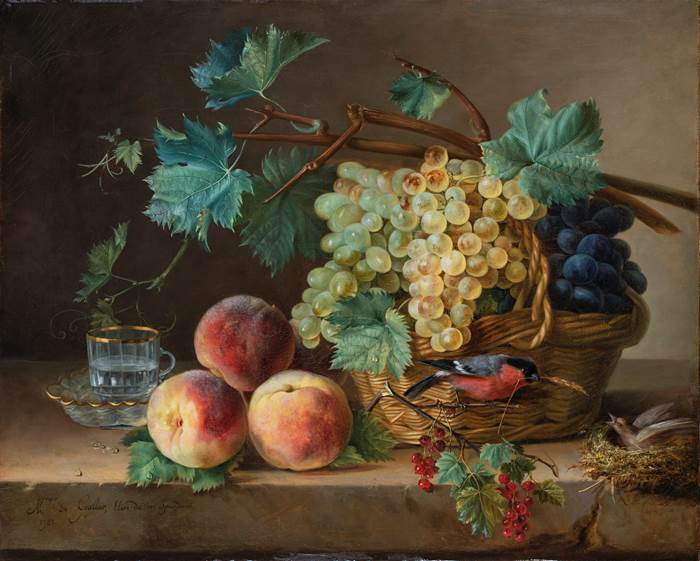 The exhibition we organized at the Canesso Gallery in 2018 offered an opportunity for discovering some of the still life paintings of the Marquise de Grollier, including this canvas of Peaches and a basket of grapes, birds and a cup and saucer. Here she shows not only the skill in flower painting for which she was so admired, but also her mastery of fruit and decorative objects such as the gold-edged glass cup, not to mention the picturesque detail of the red-breasted bird bringing an ear of wheat to a nestling. The drops of water scattered here and there accentuate the mimetic effect of the composition, which celebrates the Marquise’s love of nature in general, beyond her passion for flowers, which she herself enjoyed cultivating. She takes care to mention in her signature that she was a pupil of the Flemish artist Gerard Van Spaendonck (1746-1822), who trained in Antwerp with a flower painter and who was later appointed miniature painter to the King at the Jardin Royal (the future museum), where he began to practice from 1780. The Marquise de Grollier no doubt attended his classes from that date onwards.

In the eighteenth century there were numerous women who excelled at still life painting, and Michel Faré, the specialist in this genre in France, notes that “the Marquise de Grollier did her best to compete with Anne Vallayer-Coster” (1744-1818), another brilliant exponent of the genre. Her oeuvre, which has only just been rediscovered, is rare and still little known. It includes a painting at the Los Angeles County Museum of Art, one which she presented to the Société nationale d’Horticulture in Paris (it is still there)1, a canvas reproduced by Faré in his volumes on French eighteenth-century still life painting2, and of course the four rediscovered pictures which we exhibited in 2018.

“Madame de Grollier painted flowers superlatively, and was far from having what is called an amateur talent. Many of her pictures could be placed beside those of Van Spaendonck, whose pupil she was. She was wonderfully eloquent when talking about painting, as she was, besides, about all subjects” (Élisabeth Vigée Lebrun, Souvenirs, 2 vols., Paris, 1835-1837) – thus Élisabeth Vigée Le Brun, discussing her talented friend in her memoirs, after having left a marvellous easel portrait of her (1788, private collection)3. Vigée le Brun painted not only the portrait of the Marquise de Grollier but also that of her companion, the Bailli de Crussol (now New York, Metropolitan Museum of Art); the Marquise and Bailli lived from 1779 until the Revolution in the Château des Tuileries, in the close entourage of Queen Marie-Antoinette. He was her companion in exile during the years of the Revolution, which took them to Florence, and when they returned, they shared their life together until his death in 1815, in their house at Épinay sur Seine.
When she lived in Florence, her workshop became “the meeting-place for famous artists […]. Canova was her friend, and nicknamed Madame de Grollier ‘the Raphael of flowers’” 4.
It was also in the Tuscan capital that François-Xavier Fabre (1766-1837), a native of Montpellier, painted the bust portrait of the Marquise (private collection). Any reconstruction of her oeuvre requires a study of her Italian sojourn.

Beyond her mastery of painting, Charlotte Eustache Sophie de Fuligny Damas, Marquise de Grollier, was a talented garden designer, a skill inherited from her mother. She created no less than three gardens, each in the properties she successively owned: at the Château de Pont d’Ain, the residence owned by her husband, Pierre Louis de Grollier (1730-1793), a passionate mineralogist, where she lived during the first years of her marriage; her property (named “Vaucluse”) at Lainville en Vexin, near Meulan, a little north of Paris; and lastly, after her return from exile in Florence, at her château in Épinay sur Seine, in all likelihood identifiable as the present-day Hôtel de Ville (City Hall). Nothing remains of these splendid creations except for what may be reconstructed through archival references.

The Marquise de Grollier was thus an exceptional woman and multi-faceted artist, not to mention a philanthropist who worked for the common good. She never shrank from advancements in social progress, for example constructing an artesian well (employing the finest engineers of the time) in her last garden so that the inhabitants of Épinay could have access to drinking water. She also had a neighbourly conscience, financing specific projects for the benefit of the poor and challenged of her community, particularly the blind. In her old age, she herself suffered from gradually diminishing eyesight, and was very sensitive to this handicap.5