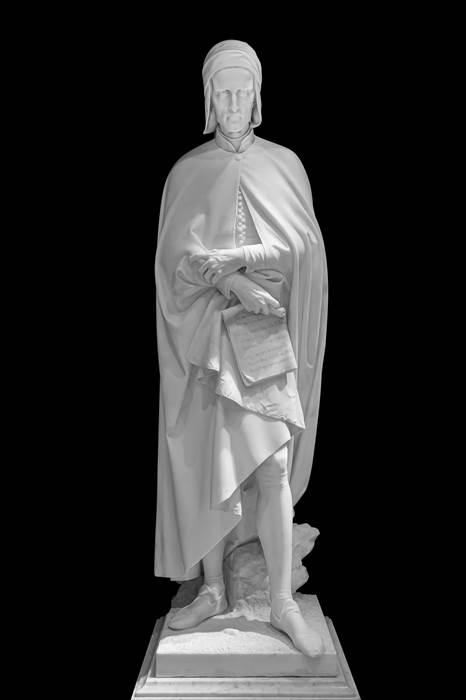 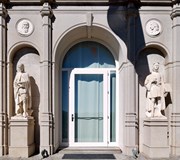 Hermann de Stern (1815-1887), purchased in 1872 at the Mostra della Società Permanente in Milan. Switzerland, private collection, by descent since 1985.

This charismatic carved portrait of Dante Alighieri is signed by Vincenzo Vela (1820-1891) and dated 1872. Extremely refined in its rendering of fabric and flesh, this life-size marble (a little over five feet high) is a splendid example of the realism that was a distinctive feature of Vela’s work. Striking attention is given by the sculptor to every detail of the fine-knit stockings and the wrinkled seam of the lining of the cape. The human figure is treated in the same way: the aged poet’s thin skin reveals his bone structure and the veins and tendons of his hands, while his forehead is crossed by a vertical, expressive furrow.
During the second half of the nineteenth century, the figure of Dante was enormously popular throughout Europe. In Italy he was portrayed not only as a poet and man of letters but above all as a politician and exile, taking on the symbolism of patriotism and revolution. With respect to traditional iconography, Vincenzo Vela’s Dante shows sharper features and a frowning expression. Already in 1857 the sculptor had faced the question of physiognomy1 when he created a bronze bust of the venerated writer.
Before carving the full-length figure, Vela had certainly seen the large stained-glass window with the Triumph of Dante made by Giuseppe Bertini (1825-1898) for the Universal Exposition in London in 1851 (Fig. 1). There, a very young Dante is shown seated on a mediaeval-style throne, lost in thought. Though adapted to the neo-Gothic taste that was widespread in Italy of that era, the characteristic dress found in traditional Dante iconography makes the subject unmistakable. Vela seems to recall Bertini’s figure in details such as the mantle closed by a single button and lined with fabric that ripples along the seam. His head adopts the bent, pensive pose, while the right hand is almost a direct citation. One might imagine that the sculptor’s intention was to represent Bertini’s young Dante as an elderly man.

The sculpture presented here is a full-length version of the Dante Alighieri made by Vela for the Municipality of Padua on the occasion of the sixth centenary of Dante’s birth. In 1865 the monumental Dante, together with its counterpart, a statue of Giotto, was placed under the portico of Prato della Valle in Padua, where it is still visible today (Fig. 2). Here, as if absorbed in sorrowful meditation on the fate of the nation, the poet is not merely a patriotic symbol: Vela succeeds in giving the historical figure the psychological depth of a real individual, someone who lived in the past and can communicate with the present2.
The gesso model of our sculpture is housed in the Vela Museum in Ligornetto, and another marble version has adorned the façade of the museum since 1866 (Fig. 3); however, the condition of the latter has sadly been compromised by the external setting it has occupied for over 150 years. Today many of the subtleties that define our Dante can no longer be appreciated in the version in Ligornetto.
The gesso and sculpture in the Vela Museum, as well as the marble presented here, differ from the Dante in Padua, being smaller and lacking the pen in the figure’s right hand. Vela’s correspondence3 reveals that in 1865 Giuseppe Zaccheroni (1800-1876)4 commissioned the sculptor to make a statue of Dante with a revision, probably precisely that of the pen. The letters suggest that the purchase was never completed, and that the work probably remained in the artist’s studio.
A comparison with a period photograph (Fig. 4) enables us to state that Vela sent our Dante to the Società Permanente di Belle Arti in Milan, and that the work was exhibited in Milan, Trieste and Venice in 1871 and then again at the Permanente in 1872. Following this exhibition, it was purchased by Baron Hermann de Stern (1815-1887), a German banker resident in London. The presence on our sculpture of the inscription “V VELA MILANO 1872” was certainly added when the marble was sold to Baron de Stern. It cannot be ruled out that this was the piece commissioned by Zaccheroni and left unsold.
Born into a humble family in the Swiss Canton of Ticino, Vincenzo Vela began working as a stonecutter when he was only nine years old. At the prompting of his sculptor brother Lorenzo, he moved to Milan in 1834, attending the Academy and soon achieving great success as the protégé of the city’s artists and intellectuals. These were the years of the Risorgimento: Italy was unified in 1861 after over two decades of very violent struggles, especially in the north. During this crucial phase, many intellectuals and artists took sides, some of them helping to inspire the anti-Austrian revolt in the Lombardy-Veneto region. Among these was the painter Francesco Hayez (1791-1882), one of the principal teachers and promoters of our sculptor.

Vela enlisted several times as a volunteer in the struggles for unification, and because of his politics he was forced to leave Milan in the early 1850s. He moved to Turin, the city of choice for many Italian revolutionaries, becoming professor at the Accademia Albertina (the Academy of Fine Arts) and receiving numerous commissions from the progressive nobility. During his decade in Turin, Vela established his fame at an international level too, and obtained several prizes at the Paris Salon of 1863 and 1867.
In the mid-1860s, Vincenzo Vela left Turin to return to his hometown of Ligornetto in the Ticino. The sculptor had recently had a large residence built in this small town, a sort of house-workshop- museum. Conceived and designed from the outset with exhibitions in mind, the Villa Vela was the first museum in Ticino, and it has remained a jewel in the Swiss countryside.
Our Dante is one of the few works by Vincenzo Vela not housed in public or institutional collections. It embodies the aesthetic, poetic and ideological characteristics of the Risorgimento, conveying the true spirit of the Italian nineteenth century.

Notes:
1. The question of Dante’s features became deeply felt after the discovery of the earliest portrait of him painted by Giotto in the Chapel of the Podestà in the Bargello in Florence was rediscovered in 1840.
2. Indeed, it was precisely for these reasons that he received criticism. While appreciating its composition, the historian and critic Pietro Selvatico wrote that “quella faccia arcigna, più assai che le austerità ed i severi concentramenti del pensatore, mi ritrae gli stizzosi dispetti di un brontolone. Poteva esserlo Dante vivo, ma non deve darne segno l’apoteosi del suo sconfinato intelletto qual è la sua statua onoraria” (P. Selvatico, Guida di Padova e dei principali suoi contorni, Padua: Tipografia e Libreria editrice F. Sacchetto, 1869, p. 321). What was most appreciated about Vincenzo Vela’s poetics was this realism and his capacity for existential understanding.
3. Carteggio, ed. by G. Zanchetti, vol. I, 1846-1866, Bellinzona: Edizioni dello Stato del Cantone Ticino, 2020, pp. 473, 481-483.
4. Zaccheroni was a priest and lawyer who lived in exile in France after taking part in the revolutionary governments of the 1830s.