Evaristo Baschenis (1617-1677). The triumph of musical instruments in seventeenth-century painting 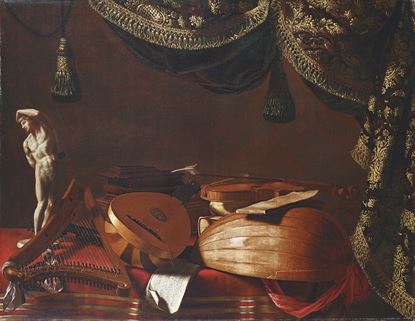 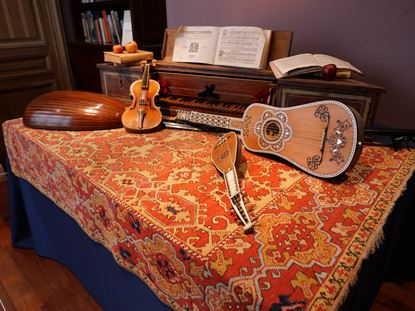 A century since his rediscovery, and a few decades after the monographic exhibitions in Bergamo and New York (Accademia Carrara, 1996; Metropolitan Museum of Art, 2000), Evaristo Baschenis (Bergamo, 1617-1677) is presented for the first time to the French public through a limited group of works (nine paintings) displaying his treatment of the subject of music, which brought him fame and fortune during his lifetime.
Baschenis invented an iconography that appealed to lovers of both art and music, ennobling the still life genre by raising precious instruments from the renowned workshops of Brescia, Cremona, Padua and Venice to the rank of absolute protagonists. His admiration for these wonderfully crafted pieces is conveyed by the absolute fidelity with which he portrays them “dal vero”, in a sophisticated musical play of shapes and colours, with splendid curtains framing scenes drawn from some personal theatrical stage. The painter-musician’s devotion to his subject also shines out in his signatures, applied with typically Baroque inventiveness to the instruments themselves, suggesting that he not only painted them but also built them, in imitation of his beloved luthiers Hartung, Gasparo da Salò, Tieffenbrucker and Sellas.
In the motionless magic of his compositions, and the slight veil of dust that covers some of his instruments, we feel a sense of expectation, like a metaphysical meditation on the world, experienced in the silence of suspended time.

Research for this exhibition has made it possible to discover that the score of one of the paintings (no. 4 in the catalogue) is that of a famous madrigal by the Flemish composer Roland de Lassus (Mons, 1532 – Munich, 1594), with lyrics from sonnet CLIX of the Canzoniere by Petrarch (1304-1374). This is a rare occurrence in the painting of the period, and indeed unique in Baschenis’s oeuvre; scholars have hitherto regarded his images of musical scores as based on fantasy. By the same token this discovery confirms Petrarch’s enduring fame in the seventeenth century.

This importance of this event – organized by the Canesso Gallery in conjunction with the Accademia Carrara in Bergamo and the Museo Teatrale alla Scala in Milan, each of which is lending a painting – is attested to by the high quality of the works on display, outstanding among which are the grand canvases of the Agliardi Triptych (c. 1665), Baschenis’ finest masterpiece. These pictures will be exhibited alongside a selection of ancient instruments including a Spinet by Graziado Antegnati (1523/1525 - c. 1590 ), a Roman Theorbo by Giovanni Tesler (active in Ancona between 1600 and 1650), a Guitar by Giorgio Sellas (c. 1585-1649), a Violin by Nicolò Amati (1596-1682), and a Mandolin attributed to Giacomo Ertel (c. 1646-1711).

The exhibition is under the generous patronage of the Italian Embassy in Paris.