Active in Mantua during the second half of the eighteenth century 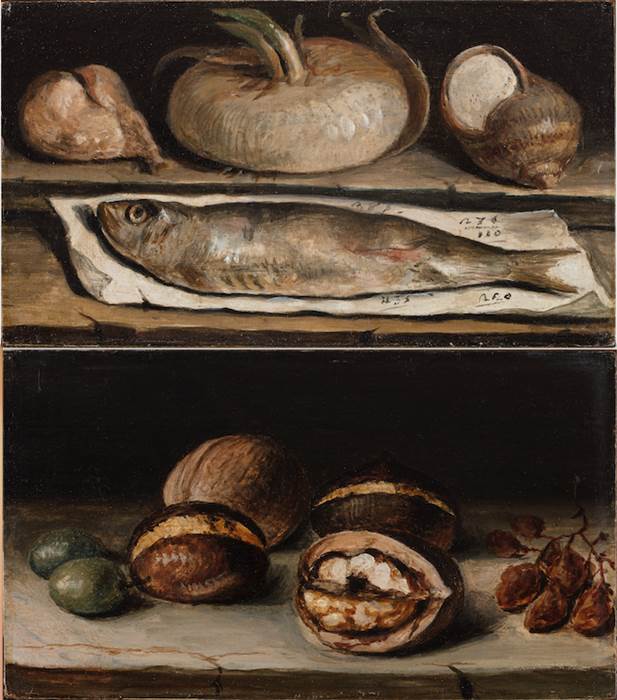 Signed and dated on the back of each painting: “Joseph Artioli Centensis Encausto pingebat / Mantua 1785”.

A native of Cento, Artioli spent his career in Mantua, where he worked mainly as a portrait painter for the local nobility. He was one of the most active promoters of the Accademia degli encausti founded in 1784 by Marchese Giuseppe Bianchi. Adopting the process of encausticpainting – mixing pigment with beeswax – he decorated a number of Mantuan palazzi. The revival of a technique used in ancient Roman painting, which had recently been rediscovered in Pompeii, led to a whole series of debates and publications in both France and Italy regarding this lost pictorial method. It was in Parma in 1787 that Don Vincenzo Requeno published his Saggi sul ristabilimento dell’antica arte de’ Greci e Romani pittori, a true plea for the rediscovery of wax-based processes.

These two still lifes by Giuseppe Artioli show that the technique found renewed favour among artists. Signed and dated 1785 on the versos, our small-scale panels bear historic witness in two ways, providing evidence not only of the painter, whose oeuvre remains little known, but also of the revival of this culturally significant form of art. The decision to divide one composition into compartments, on two levels, and making the subjects easy to read through great sobriety, is modelled on ancient Roman painting and its legacy. The almost photographic depiction is achieved by way of monochrome tones in a range of greys and browns, with the addition of green for the olives.

In the realm of Lombard still life painting, we are certainly far from the overloaded tables of the kitchen interiors by Bartolomeo Arbotori (1594-1676) or Evaristo Baschenis (1617-1677), but not so distant from the artistic sensibility of Giacomo Ceruti (1698-1767), who lent greater importance to a single motif than to the general atmosphere of a place. This sensibility was to evolve in the modern period, as one can see in the work of an artist such as Filippo De Pisis (1896-1956).