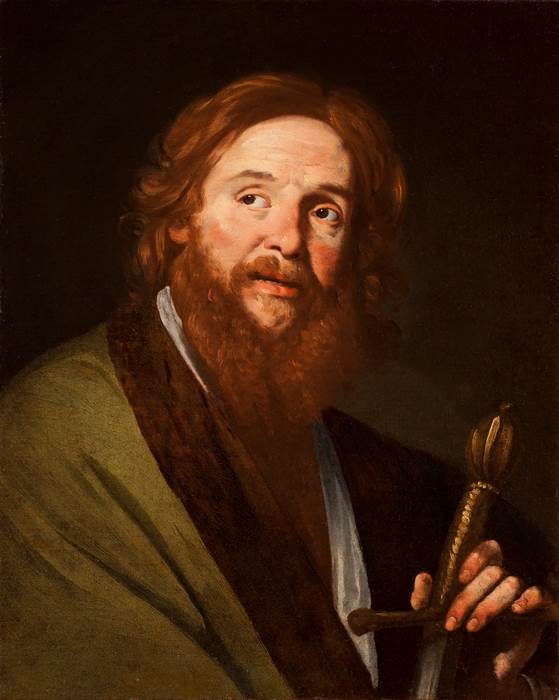 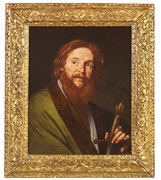 This bust-length figure of Saint Paul is a very recent addition to the catalogue of the artist’s work, as newly established by Camillo Manzitti. The subject is not an unfamiliar one in Bernardo Strozzi’s oeuvre as he treated it several times in a similar format, though with variations in pose and type of model (Bologna, Molinari Pradelli collection; Genoa, Galleria di Palazzo Rosso).1 Our saint, his hand resting on the sword that was the instrument of his martyrdom, is depicted with bust turned to his left, while his face is decidedly frontal, and his gaze directed upwards so as to animate his features; the potent psychological and physical qualities, especially the handling of the red hair, prompt us to imagine that this could be a portrait. A passage of light behind the saint’s shoulder in the middle ground elegantly detaches the figure from its dark background.
The artist’s style is recognizable here in the generous use of pigment, applied with impasto, the red highlights (especially on the fingertips and cheeks), and the sophistication of colour, culminating in the fine harmony of the red-browns and green, unusual in its tonality, that brightens the foreground. Looking at the expansive brushstrokes that give structure to the figure, one can sense just how strongly Strozzi meditated on the potent art of the Fleming Peter Paul Rubens (1577-1640), who sojourned in Genoa between 1605 and 1606, painting portraits whose rigorous dynamism made a considerable impact on Genoese art.
Camillo Manzitti dates the picture to about 1625, at a point when the painter’s fame was well
established. The tight format, customary for Strozzi, was no doubt favoured by him as he valued the spontaneity allowed by a close-up depiction. Manzitti situates the canvas close to the melancholy Saint John the Evangelist (formerly Chiavari, Mario Sanguineti collection), and another highly inspired Saint John the Evangelist in the Palazzo Durazzo Pallavicini in Genoa.2 Our Saint Paul shares with these figures the compositional focus on the hand holding the attribute in the foreground. As regards style, the figures emerge from a dark background, with light concentrated on the faces, which is a way of suggesting divine inspiration while accentuating psychological character.
Bernardo Strozzi’s youth was marked by his decision to give up the secular world at the age of seventeen, when he entered a monastery and remained for nine years until late 1608 or early 1609, a fairly long time with respect to his absence from a painter’s workshop. But he had already learned the rudiments of his art with the Genoese painter Cesare Corte and then the Sienese Pietro Sorri (1556-1622), who arrived in Genoa at the end of 1595, staying until the early months of 1598. Cloistered life did not impede him from painting, since it was on the strength of his skill in this field that he was allowed to abandon his Capuchin habit for that of a priest, whence his name in the early sources of “prete genovese”. He was thus able to work for the two great families of Genoese patrons, the Doria and the Centurione. Bernardo Strozzi swiftly moved from easel paintings to grand mural decoration, his crowning achievement being the frescoes in the choir of the church of San Domenico, commissioned by members of the the Doria family, Gio. Carlo and his cousin Gio. Stefano. The only evidence of this almost entirely destroyed work (the last payment for which dates from 1622) is a preparatory oil bozzetto for the vault with The Vision of Saint Dominic (Paradise), housed in the Museo dell’Accademia Ligustica, Genoa. Between the end of April and the end of July 1625 he probably spent time in Rome, apparently summoned by the friars of his order, who were seeking a stronger Capuchin presence in the Eternal City. 1625 was also the year in which he was tried by the order for the illegal practice of painting beyond the conventual walls. Recalled to Genoa after a possible condemnation, he was held by the Capuchins for seventeen months until he fled to Venice in 1632-1633.
In the Serenissima, finally free after his flight from Genoa, he worked for eleven years and earned great recognition. There his palette became lighter, and – inspired by the legacy of Paolo Veronese (1528-1588) – more intense. His success resulted in public commissions and a continual demand for work that led to him to collaborate with other artists, especially the Paduan painter Ermanno Stroiffi.