The Chastisement of Love (Mars Whipping Cupid, Pursued by a Fury) 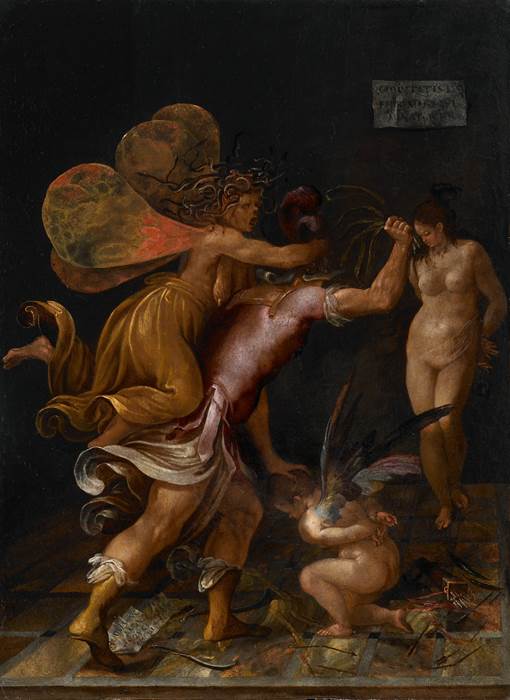 This enigmatic image in oil on panel is closely related to a drawing (fig.1) in the Statens Museum for Kunst, Copenhagen, which bears an old inscription “Camilo mantuan”, and which provides much of the composition for the painting. Recently, the author of both drawing and painting has been identified as the Mantuan painter Camillo Mainardi.
The central figure, seen from behind and wearing a helmet and armour, is recognizable as Mars. He is whipping Cupid, the bound, kneeling figure at his feet, who is guilty of having made him fall in love with Venus. Feathers plucked from Cupid’s multi-coloured wings lie strewn on the ground, together with his bow and broken arrows. Mars is tormented by a monstrous female figure with snakes in her hair, fluttering drapery and coloured wings, a possible allegory of Envy or Jealousy.
With respect to the drawing, the background architecture has been eliminated, and we see a nude female figure, probably Venus, her hands tied and in a submissive pose. We do not meet the gaze of any of these figures except that of the Fury, although she is blinded, as is the mind of Mars while he carries out his savage deed. On the wall above her a plaque bears a partly-legible inscription, “COMUTATIS IN/ FERRI...MAG... FULMINAT...”, maybe alluding to how love can subjugate or enchain. At Mars’ feet, another inscription on a sheet relates how Love conquers all: “OMNIA VINCIT/ AMOR/ (E)T NOS CEDAMUS/ AMORI” (Virgil, Eclogues, 10:69). Whoever commissioned this work must have been cultivated and sophisticated enough to request such a peculiar subject, with an iconography that is not so easily decipherable.
Our painter worked for the Gonzaga family, initially for Orazio Gonzaga between 1576 and 1585 and then for Guglielmo Gonzaga, Duke of Mantua, for whom he decorated some of the rooms in his palace in Goito, from 1586 to 1587. In early 1597, Mainardi is recorded as employed by Countess Giulia Gambara in Brescia.
The panel clearly reflects Mannerist ideals, with intense, changeant colours and sinuous forms, and thus a dating to the later sixteenth century is plausible.