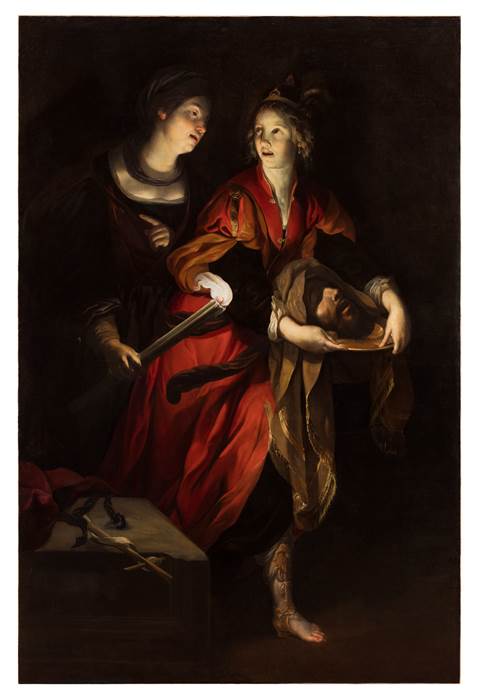 First presented by Gianni Papi in 2017 during the study day Francesco Rustici e il naturalismo a Siena, our Salome with the Head of John the Baptist forms part of the Caravaggesque oeuvre of the Sienese painter Francesco Rustici, who had had a first sojourn in Rome in 1618-1619. The use of a torch as the sole source of light follows the formula developed by the Utrecht artist Gerrit van Honthorst (1590-1656) during his Italian years, between 1610 and 1620.
Without the cross and scroll placed next to the shackles and chain of the saint’s imprisonment, the image might be mistaken for a Judith with the Head of Holofernes. The painting is striking for the elegance of the life-size figures, the complementary tones of Salome’s red cloak and the golden-brown fabric covering the Baptist’s severed head, and the description of light on the faces of the two women as they emerge from the penumbra. The dramatic effect of the Gospel narrative (Matthew 14:1-12, Mark 6:14-27) is further enhanced by the dialogue and knowing look exchanged by Salome and her maidservant.

The theme was treated by Rustici on several occasions, and this canvas was no doubt executed during his second Roman sojourn, in about 1624-1625, when he produced a painting of similar size and subject for Cardinal Lorenzo Magalotti, a native of Florence.1 Magalotti was created cardinal by Pope Urban VIII (Maffeo Barberini) in the consistory of 7 October 1624.
When he published our picture in 2020, Gianni Papi also illustrated several versions of this subject, which was much favoured by the artist and his patrons. In 1990, Papi had attributed to Rustici a composition – cropped in its lower part, though it still included the stone, but without the cross and shackles – in the first chapel on the right in the church of Sant'Anna in Genoa.2 As he pointed out, Ágnes Szigethi had already identified another version of our composition in the Museum of Fine Arts in Budapest, in 1984.3 That canvas is the closest to ours (also as regards dimensions), and Szigethi associated it with the inventory of the collection which included paintings owned by Cardinal Lorenzo Magalotti, who was Rustici’s protector between 1624 and 1626. A fragment of the same composition (once in Berlin in the Elizabeth von Klopmann collection) was recognized by Gianni Papi in a photograph, but given its fragmentary state, it is impossible to tell whether this could also claim to have the same prestigious provenance.

A pupil of his father Vincenzo Rustici (1557-1632), our artist belonged to a family that counted among its members yet another painter, his uncle Alessandro Casolani (1552-1607); Francesco’s biographers recall his meteoric rise and premature death at the age of thirty-four. He was a brilliant exponent of Caravaggesque naturalism, in the wake of the Northerner Gerrit van Honthorst (“Gherardo delle Notti”), whose innovative goal of capturing the luminous effects of “candlelight painting” was followed by our artist in Rome at a late stage, in about 1625; Honthorst had already left Italy in 1620. No doubt the taste for these compositions with intense contrasts of light and dramatic theatricality had an enduring appeal for certain patrons. As Marco Ciampolini has successfully studied and demonstrated, Rustici appears in the collections of Giulio Mancini, Cassiano del Pozzo, Cardinal Lorenzo Magalotti and even in that of Cardinal Richelieu; but his works were above all collected by the Medici family, in the residences of Cardinal Carlo, and by his most important patron, Maria Maddalena of Austria, the Grand Duchess of Tuscany and wife of Cosimo II.4