The Virgin Adoring the Child 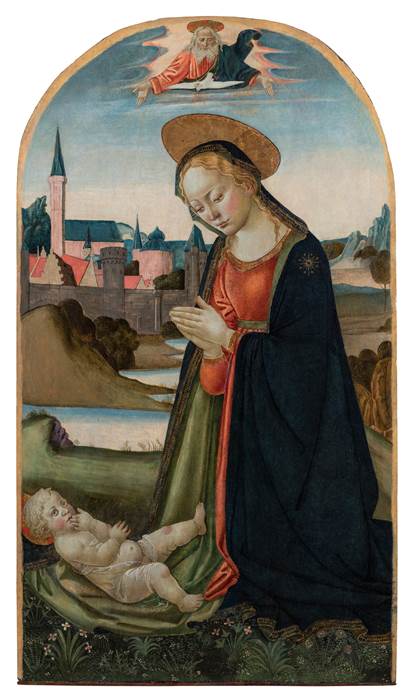 This is a “colmo da camera”, a type of object that was much in vogue in fifteenth-century Florence, above all in the bedchambers of patrician and noble houses: a picture of a religious subject intended for private Christian devotion, contained dimensions (in this case it even has a standard width, almost identical to the Florentine braccio, or 58.4 cm), and nearly always painted on an arched panel (Pons 1992, pp. 219-231).

The composition shows us the Virgin and Child forming an inner gable, which captures all our attention and invites concentration and prayer. The varied landscape, lit by an early morning light, includes a city enclosed within sturdy walls on the left – a heavenly Jerusalem with Northern European architectural elements. The tall gate tower on the right, almost a westwork structure with a high-pitched roof, and the building on the left with the crow-stepped gables, in fact derive from Flemish painting, which in the second half of the 1400s was well known and much appreciated in Florence through commerce and collecting, notably by the Medici.

The painting’s stylistic features indicate a firm attribution to the Master of San Miniato, an artist whose name has remained unknown for almost a century, and whose oeuvre has been assembled around his name piece, the altarpiece of the Virgin and Child between Saints Sebastian, John the Baptist, Martin and Roch in the church of Santi Jacopo e Lucia in San Miniato, between Florence and Pisa. This artist was recently identified as Giovanni di Lorenzo di Nofri (Bernacchioni, 1992, pp. 178-179; eadem, 1998, pp. 37-41), a pupil of Neri di Bicci from 1465 to 1466 (Ricordanze, 1976, pp. 244-245, 264, 268-269, 272) who was already an independent master in 1472, with a workshop “al canto dei Servi”, on the corner of the piazza opposite the Basilica of Santissima Annunziata in Florence (Bernacchioni, 1992, p. 179). Compared with the language of his teacher, Lorenzo di Giovanni’s expression is more polished, without ornament and showing a focus on the volumes and contours of the figures, and echoing the painstaking, sweet features of Filippo Lippi and Pesellino, especially in his early works. His mature oeuvre, around the 1480s, betrays the influence of Verrocchio – evincing a greater definition of volume, with more accentuated chiaroscuro – and above all that of Francesco Botticini, who in 1459 had also been active in Neri di Bicci’s workshop and who no doubt remained in close contact with Lorenzo di Giovanni (Bernacchioni 2010, pp. 89, 152-155).

In the Adoration of the Child studied here, the hands and face of the Virgin are given three-dimensionality by delicate highlights that enhance their anatomical structure. The lively, sculptural Christ Child has his fingers in his mouth: a gesture inspired by Masaccio, for example in the San Giovenale Triptych (1422) and in his Virgin and Child Enthroned in the National Gallery, London (the central panel of the Pisa altarpiece of 1426), and subsequently adopted by Florentine artists, including Verrocchio, who repeated it in a sketch on the recto of a sheet with Drawings of Children in the Louvre (Département des Arts Graphiques, RF2), and again in painting, for example in the Virgin Adoring the Child (the Ruskin Madonna) in the National Gallery, London (1470/1475).

It is precisely this Verrocchiesque and powerfully sculptural quality of the Child in the Adoration, together with the Flemish references in the landscape – with particular echoes of Memling – that suggests a date around 1480, in the opulent Florence of Lorenzo the Magnificent. In that period, Florentine painting and sculpture workshops saw a continuous output of art produced to satisfy the demands of an emerging merchant class, and it availed itself of creative processes that repeated much-appreciated formulas, sometimes involving the re-use of cartoons and models. Bearing this in mind, we may understand the felicitous popularity of this Adoration, of which there exists a version almost identical in format and composition, housed until 1999 in the North Carolina Museum of Art in Raleigh (Castri 1988, pp. 236-237).

Comparative literature and works cited in the entry: