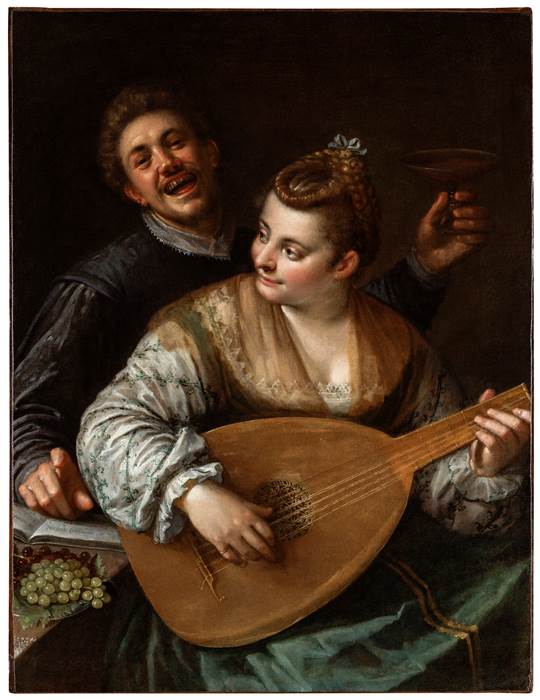 
Hans von Aachen’s Self-portrait with Donna Venusta is one of the best-documented and most admired compositions by this German painter, whose life was defined by extensive travel. From his native Cologne, he journeyed to Italy and then Munich and Augsburg, before going to work in Prague, in the service of the great patron of the arts Emperor Rudolf II (1552-1612).

His Italian sojourn began in about 1575, following a path now well known to us: first Venice, then Rome and Florence, before ending once again Venice in 1586/1587. In 1604, when the artist was still alive, the painter-biographer Karel Van Mander (1548-1606) made an invaluable contribution to our knowledge of the painting and its iconography, writing that the artist “[…] also portrayed himself laughing with a female called Madonna Venusta beside him playing on a lute while he stands behind her with a dish of wine in his hand”. Much later, in the eighteenth century, the painter and art historian Jean-Baptiste Descamps (1715-1791) underlined the identity of the female model: “[…] a very well-known woman playing the lute”.
First and foremost, the name “Donna Venusta” suggests “una bella donna” in Italian (venustas in Latin meaning graceful beauty, from the goddess Venus). In a paper given in 2012 on Anthonis Santvoort (1552-1600), a Netherlandish artist in Rome who hosted Hans von Aachen, Lothar Sickel presented new archival documentation revealing that Venusta was the name of Santvoort’s sister-in-law. She and her sister Dominia, who married Santvoort in 1582, were daughters of the jurist Appollonio Ceccarini. We also learn from Sickel that Venusta was married in 1576 to a certain Simone Brunelli, and if we posit that she was born in about 1560, she would be aged about twenty-five when this portrait was painted, which could thus reflect her appearance. She was widowed at an unknown date, and in April 1598 she married one Giovanni Maria Vanti1.

Santvoort’s workshop was a hub for the artists arriving in Rome from Northern Europe, and indeed he sometimes acted as their agent. It was through him that Hans von Aachen obtained the significant commission of an altarpiece with the Nativity for the church of the Gesù (lost, but known through an engraving), brought to the church from Santvoort’s shop in 1584.
This scene could thus reflect a festive, musical moment in the “casa Santvoort”. Donna Venusta’s dress and hairstyle are not those usually associated with seduction, and the image conveyed here seems to suggest a certain connivance between the two protagonists, with the smiling young woman turning to her merry companion. We then find ourselves before a double portrait, though the codes of representation used here bring to mind those of the genre scene, both Northern and Italian. Joachim Jacoby noted how much our composition owes to this same sort of subject in Flemish painting, and in his monograph of 2000, he reproduces an anonymous picture (c.1530-1540) in the Rijksmuseum het Catharijneconvent in Utrecht which resembles our pair of figures even in its wish (or perhaps need) to set the scene within a moral context, in this case that of Vanity2
Other Flemings, often the ones who made the journey to Italy, and Rome, such as Frans Floris (1516/1520-1570) certainly influenced Hans von Aachen with their ambivalent compositions. In 2018, Thomas Fusenig rightly noted that the half-length figure type of the lute player shifts between portrait and musical allegory, and its critical fortune is especially familiar to us through Caravaggio (1571-1610). Bernard Aikema cites the motif among the precedents von Aachen could have seen in Venice: Bartolomeo Veneto (c.1470-1555), Giovanni Cariani (c.1487-1547), Bernardino Licinio (c.1490-c.1550), and of course Simone Peterzano (c.1535-1599), Caravaggio’s master in Lombardy3.

Wine, drunkenness and music are more to be found in the genre of immoral subjects, and this is no doubt why the artist felt the need to add a moral dimension by transcribing the first part of a verse from the Apocryphal Book of Ecclesiasticus (40:20): “Vinum et musica laetificant cor” (wine and music gladden the heart), which continues thus: “et super utraque dilectio sapientiae” (but the love of wisdom is above them both). The inscription appears upside down from the figures’ point of view, and is therefore legible by the beholder, who can thus easily sense the message.
In alluding to Ecclesiasticus, the image becomes an honest form of entertainment which might (without the moralising element) pass for an unbridled genre scene in which the artist – a drinker and singer in his spare time – evokes the ancient god Bacchus through the presence of the clearly-depicted wine cup and bunch of grapes. Scholars have recognised our painting’s influence on the Self-portrait with Saskia by Rembrandt (1606/07-1669) in the Gemäldegalerie, Dresden, in which the artist also raises a glass of wine.

That the likeness of this euphoric man – singing while beating the tempo with his index finger – is a self-portrait of Hans von Aachen is attested by the existence of other self-portraits of the laughing artist, either presented alone (Cologne, Wallraf-Richartz- Museum) or, as here, with two figures (Double Self-portrait, Kroměříž, Arcibiskupský zámek a zahrady; Laughing Couple with a Money Purse, Vienna, Kunsthistorisches Museum). From early in his career Hans von Aachen added a comic side to his self-portraits, describing himself in more or less full-throated laughter. He certainly sought to show his talent and no doubt used this image as a sort of business card to submit to potential patrons, but he also contributed to the emergence of a type of painting that had its source in the comic genre, which in the sixteenth century evolved particularly in Northern Italy under the impulse of the painter and theoretician Gian Paolo Lomazzo (1538-1600).
Our painter continued to develop this theme until the end of his life, as we can see in a two-sided drawing in Cologne (Wallraf-Richartz-Museum and Fondation Corboud, Kupferstichkabinett), dated 16134 which demonstrates a completely different style, by this point reflecting the manner of the Prague School.

This composition was celebrated in its day but disappeared from public view in modern times, though it was known in a black and white photograph from its sale in 1927 (a copy of which is housed in the Courtauld Institute of Art, London), until its rediscovery in 1995 by Eliška Fučíková in a private collection.5 In the meantime, in 1979, Rüdiger an der Heiden had already connected our picture (its location as yet unrecognised) with a privately-owned drawing – more retrospective than preparatory – which presents the same couple, this time standing.6 This drawing has the merit of bearing a signature and date, “7 Septe. Ro.[ma] Hans von achen a° 158…” (the last number is not legible, though it could be “4” according to Fučíková). Jacoby is more inclined to date our painting to the period 1580-1585, and quite soon after his arrival in Rome. In 2000, the painting made its appearance in the monograph on the painter by Joachim Jacoby, and then had the distinction of being included in the exhibition dedicated to him in 2010-2011 in Aachen, Prague and Vienna.

As regards style, the painting bear hallmarks of the artist’s oeuvre, in particular the application of light in loaded brushstrokes, using half-tones. This dynamic, rich handling gives vigour to our pair of figures, who are set in an undefined space, with a dark background enhancing the green and golden tonalities of Donna Venusta’s dress. The velvety quality of skin, the warm passages on the cheeks, and the search for depiction of character, are all indebted to Venetian painting of the sixteenth century, by which von Aachen must have been influenced during his earlier sojourn in the Serenissima.

With this composition Hans von Aachen lent impetus to the evolution of “pittura ridicola” as it developed into the painting of genre scenes, well before Caravaggio’s arrival in Rome in 1596. This is the work of a pioneer. In the closing years of his life, when he placed his talent in the service of Rudolf II, he was to move from this imposing style to the languorous Mannerism that was peculiar to the Prague School, which he helped to found.

Hans von Aachen was trained as a portraitist by a Flemish painter in Cologne and completed his training in Italy; it was thanks to the portraits he painted there (the sculptor Giambologna, Grand Duke Francesco I de’ Medici), as well as his self-portraits, that he became famous. In 1587 he travelled to Munich to fulfil commissions from the Jesuits of Saint Michael’s church, for William V of Bavaria and the Wittelsbach court, and for the Fuggers at Augsburg. He entered the service of Rudolf II in 1592 and sojourned in Prague Castle. There, his highly varied work aligned itself with the elegant and recondite character of the Prague School.