The Death of Cato 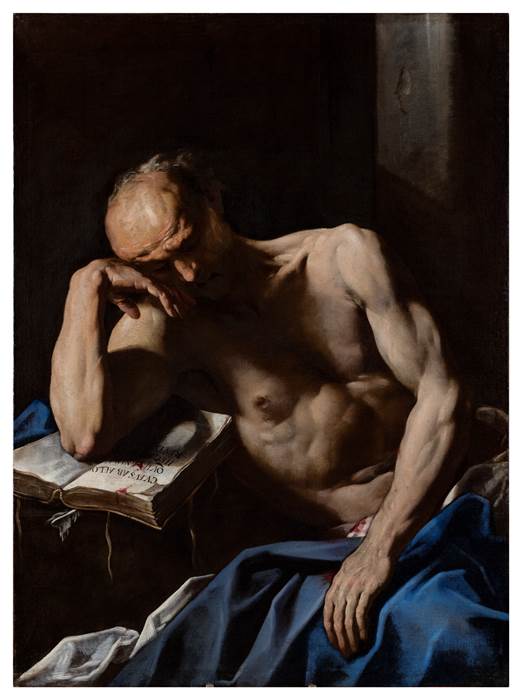 The fine handling of our figure, with its energetic brushstrokes and enhanced by a generous use of impasto in the lighter tonalities, represents a vigorous example of the art of Giovanni Peruzzini, one of a family of artists from the Marches. Judging by his style, we may say that his work of the 1660s and 1670s sought to revive an emphatically chiaroscuro approach; even in the later seventeenth century he was not the sole artist to bring this back into fashion.

Discreet touches of blood on the drapery and open book – the body appears miraculously spared – prompt us to identify the subject as the Death of Cato (95-46 BC), who took his life with a sword. The great-grandson of Cato the Elder, he was a Roman senator, a Stoic and a staunch defender of the Republic. He committed suicide in Utica (near what is now the northern coast of Tunisia) in 46 BC after the battle of Thapsus, which saw a decisive victory for the army of his bitter opponent Julius Caesar (100-44 BC). This was an ancient example of a noble death, that of the vanquished who does not wish to submit to the victor. Cato died after he had meditated on the anima (soul), as the inscription recalls. Plutarch’s Life tells us that earlier that evening he had read Plato’s Phaedo, a work addressing the attitude one should have before death, the ties between body and soul, the eternity of the soul and its fate in the hereafter. However, the citation used by the painter here is not from Plato but Ovid (43 BC-17/18 AD). This is a citation from book 4 of the Tristia, long elegies written after he had been exiled by Augustus to Tomis (now Constantsa, on the Black Sea coast of Romania) and which recount his disgrace to a friend: “O thou who art foremost among my beloved comrades, who didst prove to be the sole altar for my fortunes, whose words of comfort revived this dying soul…” (“Cuius ab alloquiis anima haec moribunda revixit”). Ovid was writing between 9 and 12 AD, and Cato could therefore never have known these texts, but the meditation on the soul is evident. Still seated, his head resting on his right hand, Cato awaits his passing in a pose recalling slumber. He is cloaked in drapery and set within a scarcely-defined space, its dark background affording us the glimpse of a column at upper right.

Without the signed and dated Saint Jerome in the Musée Girodet, Montargis (fig. 1 and 2), which echoes every part of our figure, it would have been hard to identify the hand of our Marchigian artist, whose career awaits in-depth scholarship1. These two pictures also share the same voluminous drapery, colours, and the open book on which the figures lean their elbows. The saint in the Musée Girodet has no identifying attribute other than this book, which calls to mind Jerome’s translation of the Bible into Latin. The fact that this painting is signed “Ioannes / Peruzzinus / pingebat” and dated “1665” provides secure groundwork for his oeuvre, which ranged widely across Italy according to his numerous travels.

Giovanni Peruzzini began his career in the Marches, like his father Domenico and his brothers Paolo and Antonio Francesco, who remains the best-known of the family, as he collaborated with Magnasco, painting landscapes. During the 1660s, Giovanni appears to have completed his training with his father, and then worked in Ancona, Pesaro, Modena and Rome. In Pesaro he made a painting for the ceiling of the church of San Filippo Neri, for which he was paid on 2 May 1662. Initially he was influenced by Simone Cantarini (1612-1648). Between 1662 and 1663, he carried out commissions for the Este family in the church of Sant’Agostino in Modena. In 1664, sojourning in Ancona with his father, he frescoed the lunettes of the cloister (now destroyed) in the convent of San Francesco ad Alto; by 1666 he is once again recorded in Rome, where he was active until 1675, supported by Cardinal Decio Azzolino, who commissioned him to paint the high altarpiece of the church of San Salvatore in Lauro in 1673. In Rome, Peruzzini’s style reflects his awareness of the followers of Pietro da Cortona (1596-1669), and especially of Carlo Maratta (1625-1713).
From 1672 onwards, Giovanni was in contact with the Savoy court and began to send works from Rome to Turin, before entering the direct service of the noblemen Guglielmo Francesco and Carlo Giuseppe Carron di San Tommaso, who held prestigious ministerial positions under Carlo Emanuele II, and remained there until 1677. His work in Piedmont, especially the large altarpieces, has been dispersed, and calls for systematic reconstruction and study2. He was considered a modern painter there, in the wake of Maratta. Peruzzini moved from Piedmont to Bologna, perhaps with his brother Antonio Francesco, and numerous works by the siblings are mentioned in Bolognese inventories3. During the last period of his life he worked in Milan, where he probably resided.