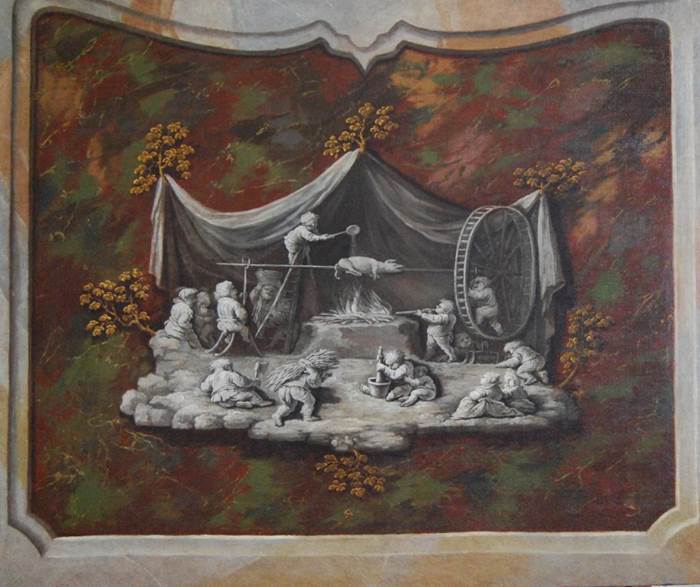 This painting represents a Dwarf Kitchen, or more precisely a sort of fantasy settlement in which miniature characters busy themselves around a grand spit on which a piglet is being roasted. The scene is designed with extraordinary whimsy: the artist has imagined a loose awning under which a giant rotisserie is activated by a dwarf working the treadmill at right, which he turns like some small domesticated rodent. A cook pours oil onto the pig, having ladled it from a cauldron steadied on his colleague’s head, while another dwarf keeps the fire going by blowing through a pipe. Below, spices (perhaps) are being crushed in a mortar, and a bundle of sticks is brought on, freshly cut by the figure on the ground, who holds an axe. Other dwarves – women and men – chat to each other and seemingly await their lavish lunch. The whole scene is composed in an elegant, carefully-shaded grey monochrome, from which only the golden yellow trees stand out, some of them supporting the great drape while others, arranged around the perimeter, provide a context for the main image.

Thus far, these elements contribute to little more than a bambocciata – a depiction of common or puppet-like figures in lowly settings – even if this is a very fine example of the genre. Yet the whole scene appears within an elegant red marble panel mottled in greens and yellows, itself set in a perspectivally-lit moulded grey frame. This particular arrangement of the image, combined with its rectangular format, suggests that this almost certainly functioned as an overdoor, or perhaps as decoration for a fire screen. Further confirmation of this type of painting lies in the work’s provenance from an historic palazzo in Bergamo that belongs to one of the most important families in the Northern Italian city, for whom this would have provided a refined and significant form of decorative furnishing.

The work is unpublished, but its attribution to Albricci is beyond question, given the numerous comparisons one can make with other works by him in the same genre. Indeed, scenes with dwarves probably account for the majority of the painter’s output after his move to Bergamo in 1763, as Francesco Maria Tassi informs us in his detailed biography of Albricci, part of a celebrated account of Bergamasque painters published posthumously in 1793. This kind of humorous painting, suitable for private collectors, immediately satisfied the taste of the city’s most demanding enthusiasts, who would certainly have known the work of Faustino Bocchi, the author of similar pictures, and who had died in 1741. Tassi relates that Albricci would have become aware of these subjects precisely through the private collections of Bergamo, especially those of Giacomo Carrara and Ludovico Feronati. The genre was evidently congenial to him, perhaps due to its witty and somewhat odd vein, as mentioned by Tassi, who imagined there was a connection with Albricci’s state of mind, which was apparently prone to episodes of eccentricity and perhaps depression. The fact is that the artist soon proved he could paint the best kind of bambocciate, to the extent that they were “no less excellent than those by Bocchi himself”, as Tassi once again tells us.

Albricci’s period in Bergamo was a busy one, with numerous commissions from the principal families, and this gave him a measure of financial stability, although he had to work very hard. Alongside paintings of the kind studied here, he worked on sacred subjects, carrying out large-scale paintings in various churches (for Albricci’s career in general, see the monographic treatment by M. A. Baroncelli, in I pittori bergamaschi, Il Settecento, III, Bergamo 1990, pp. 105-275). It should be noted, however, that while Tassi makes mention of pictures that could even have adorned a carriage or coach, Baroncelli’s text does not include any other canvases that might have functioned as overdoors, like the one before us. However, we cannot rule out that similar paintings, as yet unpublished, may exist in the same building from which this comes, or in other residences in Bergamo; Tassi himself refers to the painting of “sopraporte” (overdoors). The period in Bergamo ended with the painter's death in 1773, exactly ten years after his arrival.

It is therefore easy to date our painting precisely to the decade 1763-1773, although it would be less than prudent to propose a more precise dating. Yet given the high quality of the work, with its elegant contrasts of monochrome and polychrome, as well as its brilliantly-imagined world – like some small inhabited asteroid floating in a reddish nebula – one might guess it was painted at a particularly felicitous moment during those Bergamasque years, presumably early on. Tassi states that Albricci was “very happy to have settled in Bergamo, where art lovers much appreciated his work, especially those with pygmies, earning him continuous commissions”.

Finally, it should be noted that during recent conservation by Donatella Borsotti the old yellowed varnish that obscured the surface was removed, revealing intact and luminous brushwork in excellent condition.