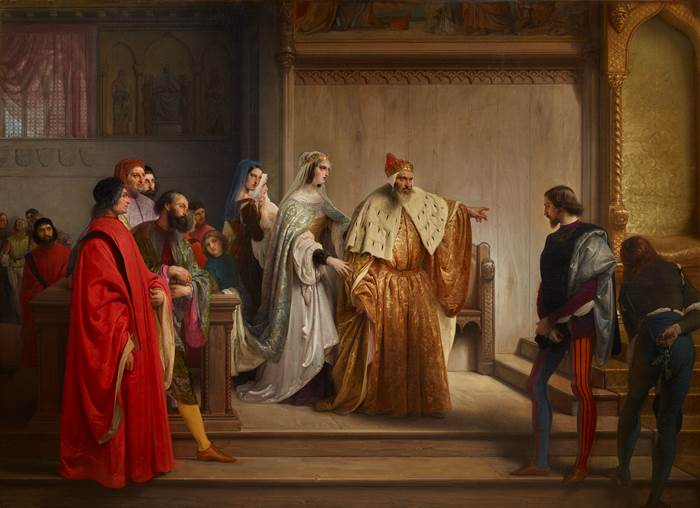 The life of Doge Marin Faliero (1274-1355) twice inspired the Venetian painter Francesco Hayez, following the literary success of this figure of the late Middle Ages. In 1820 Lord Byron (1788-1824) published his play Marino Faliero, Doge of Venice, which led not only to expressions in painting but musical recreations. In 1834, Gioacchino Rossini (1792-1868), director of music and theatre at the Théâtre des Italiens in Paris, invited Gaetano Donizetti (1797-1848) to write an opera about him: Marin Faliero, with a libretto by Emanuele Bidèra. This three-act lyrical tragedy was first performed at the Théâtre des Italiens in 1835 and enjoyed great success before being produced in London, Florence and beyond, during the rest of the century. This revival of interest in the Venetian leader reflects the troubadour taste of the time and draws on the Vite dei Dogi by Marin Sanudo il Giovane (1466-1536), in particular for the subject that concerns us here, which was suggested to Hayez by his friend the collector Count Carlo Cicogna (1784-1875). The life of the 55th Doge of Venice was particularly tragic since he was beheaded for having instigated a coup against the institutions of the Serenissima; his execution was the subject of a painting by Delacroix in 1826 (Wallace Collection, London).
In the painting before us, Hayez chooses to represent another, no less tragic, episode in the private life of the doge. The venerable leader, robed in the dress of his prestigious office, is restrained by his young wife as he points to Michele Steno and the insulting lines scrawled on the backrest of his throne – “Marin faliero della bella mojer / altri la goda e lui la mantien” – implying that his spouse has lovers, in particular the doge’s nephew, who had been killed by Steno. Hayez seeks out the Romantically-inspired Mediaeval decor in keeping with the troubadour aesthetic of his time, and makes it his own. The group of characters seem to move as on a stage, and the detailed description of the costumes and their shimmering colours contribute to the theatrical aspect of the composition. As Elena Lissoni reminds us in the catalogue of the 2015-2016 Hayez exhibition, the artist received unanimous recognition for this painting, in particular that of the architect, historian and art critic Pietro Estense Selvatico (1803-1880) who confessed that the work moved him as if it were “a scene played by the incomparable [Gustavo] Modena” – that is, by one of the greatest actors of the Romantic era.
The picture dates from 1844, and many years later, in 1867 (when Hayez was aged seventy-six), he returned to this biographical subject, painting The Final Moments of Doge Marino Falier (Milan, Brera Gallery) for the Accademia di Brera, where he had taught since 1822.

During his many years of study in Rome, between 1807 and 1819, Francesco Hayez had occasion to meet Antonio Canova (1757-1822) and adapt his style to current Neoclassical idioms. Subsequently, during his lifelong career in Milan, this great Italian artist of the nineteenth century gave expression – like Eugène Delacroix (1798-1863) – to the hopes and disenchantments of the Romantic era.