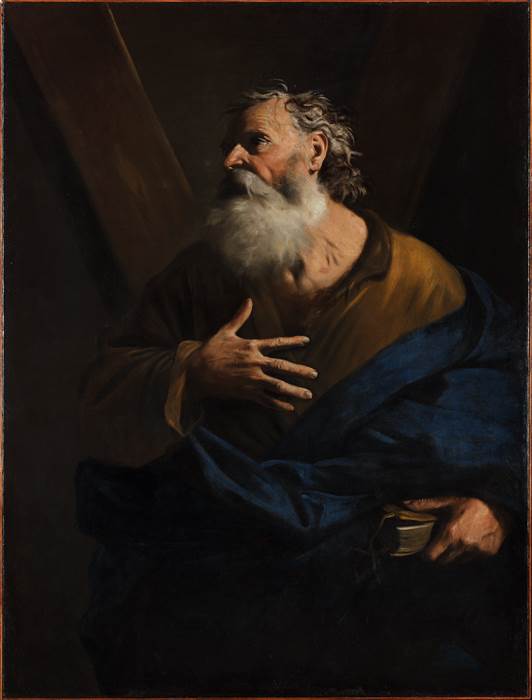 This imposing three-quarter-length figure of Saint Andrew draws it expressive qualities from the play of hands and the movement of the Apostle’s face, turned to the left as locks of hair twirl around his head. He is larger than life and exudes extraordinary power. The book in his left hand evokes his activity as evangelist: after the death of Christ he is reputed to have brought the gospel to Scythia – that is, the present-day Ukraine and Russia – before going to Greece. Here, the gesture of the hand on his chest shows his acceptance of the mission that will lead to his status as holy martyr. The X-shaped cross in the background is the one on which he was crucified, and which thus became the attribute of his martyrdom. It was imagined as distinct from that of his older brother Peter, who was crucified on a Latin cross, upside-down.

Francesco Petrucci dates this monumental figure to about 1650 for precise stylistic reasons, noting that the artist describes forms with “swift, transparent touches on the brown preparation, while other areas appear to be only sketched and unfinished, such as the right hand with thumb on the book, which is barely roughed out”. Petrucci also underlines the resemblance in facial features of the Saint Andrew and the picturesque, powerful figure of the so-called Oriental Warrior (Paris, Musée du Louvre)1. The solid convolutions of the apostle’s beautiful blue mantle wrap themselves forcefully around him, the lapis lazuli standing in splendid contrast with the golden brown of the robe and the darker brown of the shirt; and his locks of hair and beard are painted with fluid, energetic brushstrokes. Strong chiaroscuro contrasts are used to detach the figure from the dark background: the saint is strongly lit, showing to what extent Mola was a marvellous interpreter of Caravaggio’s naturalism shortly before 1650. This evolution of his style cannot be understood, according to Petrucci, without an awareness and experience of Ribera-inspired Neapolitan painting grafted onto his Emilian culture. In Rome, Mola had occasion to meet the Neapolitan artist Salvator Rosa (1615-1673), who was also a painter-philosopher with a talent for chiaroscuro effects.
Pier Francesco Mola was the son of an architect who was also a painter, and was born in the Ticino, the Italian region of Switzerland, but the family moved to Rome in 1613, when Pier Francesco was only one year old. Mola is recorded in the Eternal City until 1637, after which he travelled frequently between 1638 and 1647. After a brief apprenticeship with Prospero Orsi (1565/70-1635), who was also from Ticino, Mola entered the workshop of Cavalier d’Arpino (1568-1640) between 1625 and 1628. Scholars have hypothesized that he made a first trip to Venice in about 1634. His training in the studio of Albani (1578-1660) lasted two years – between 1638 and 1640, as proposed by Francesco Petrucci – the period during which he was absent from Rome. Between 1641 and 1642 Mola returned to his native Coldrerio, and in 1644 he is documented in Venice in the wake of Guercino (1591-1666), in whose workshop he could have been at that time; in any case, Guercino’s legacy is clear in Mola’s work of the period 1640-1642. He settled permanently in Rome in 1648, where he enjoyed great success, also painting frescoes for the great Roman families (notably at the Palazzo Costaguti). Between 1653 and 1656, he worked under Pietro da Cortona (1596-1669) on the decoration of the church of San Marco, at the behest of Niccolò Sagredo, the Venetian ambassador to Rome. Around 1658-1659, he became the official painter of Prince Pamphilj, which demonstrates how established he was in Rome, and in 1662 he was elected Principe of the Accademia di San Luca, a few years before his death in 1666.