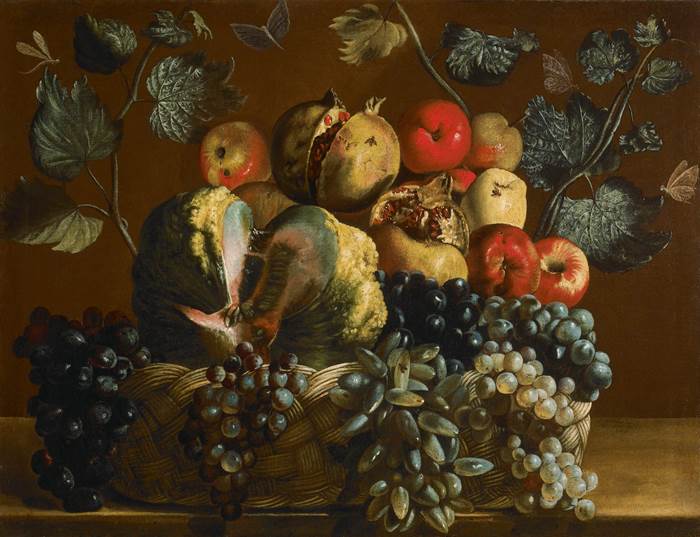 This sculptural, intensely-coloured Basket of Fruit has just been recognised by Gianni Papi as by Bartolomeo Cavarozzi, a painter he believes must be considered as the finest still life painter of the Caravaggesque movement. Already in 1996, in an article in the journal Paragone, the Italian scholar1 had hypothesised that the great painter from Viterbo had also painted still lifes without figures, some of which could be identified within the group ascribed to the anonymous Acquavella Master, to whom our composition had also been attributed prior to its exhibition at the Borghese Gallery in Rome (2017) – where it was displayed as by a Caravaggesque painter active in Rome during the first quarter of the seventeenth century – and before finally being accorded the authorship of Cavarozzi.
Until then, the painter was thought to be responsible for some still life scenes with figures, such as the ambitious Still Life with Violinist (Fig. 1; 82 x 126 cm, whereabouts unknown) and the privately-owned Still Life with two Putti (also known as the Sangalli Still Life; Fig. 2), which both contain beautiful fruit baskets with bunches of grapes draped across their edges, as in our composition.
During the 1610s and 1620s Cavarozzi developed the stimuli already present in the work of Caravaggio (1571-1610), especially as we see here with the motif of the basket, a reference to the prototype by the great Lombard master in the Pinacoteca Ambrosiana in Milan. But that is where the resemblance ends, since our subject is described in close-up, with almost no space around it, against a uniform and relatively dark background. Dragonflies flutter around on both sides of the picture, and insects have settled on the fruit, showing the painter’s decision not to exclude realistic details that give more life to the picture while at the same time inviting us to ponder on the memento mori.
The artist shows off various kinds of grapes on the outer side of the basket, moving from black to white ones, as if to accentuate the effect of proximity to the beholder enabled by this tight-knit framing. Just as in Cavarozzi’s Supper at Emmaus (Los Angeles, The Getty Museum), vine tendrils spring from behind the basket of grapes set in the immediate foreground, balanced on the very edge of the table. The sumptuous presentation of items of fruit on three levels, with apples and a pomegranate on the top of this unlikely stacking, is entirely typical of the artist.


The relatively recent appearance of an archival document of 2 March 1613, proving that Bartolomeo Cavarozzi was active as a painter of independent still lifes, provides us with a chronological parameter in this specific area.2 While it would still be premature to put forward a precise dating for such works by Cavarozzi, Gianni Papi regards them as from late in the artist’s career, in the 1620s, a period in which he also places the fine Still Life recently exhibited by Colnaghi (Tefaf 2017; Fig. 3).