A dog, a cat and a hedgehog surrounded by copper utensils 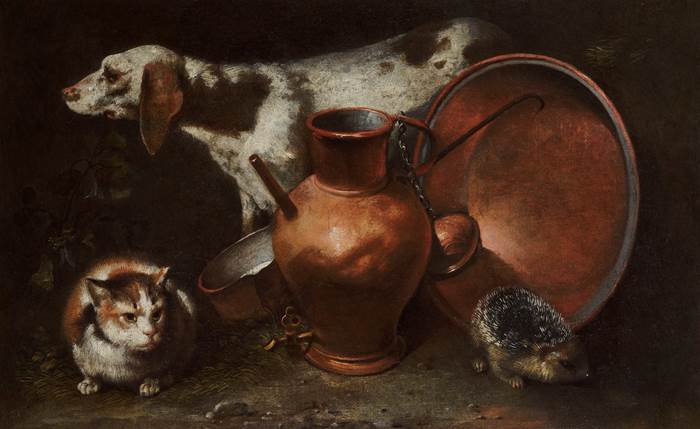 Anton Maria Vassallo was trained by Flemish painters who had formed a significant colony in Genoa during the first half of the seventeenth century. He appears to have been apprenticed while still quite young with the Fleming Vincenzo Malò (Cambrai, 1606/1607 – Rome, c. 1650/1651), who was active in the port city between 1625 and 1629, and once again from 1634 onwards. Through Malò, Vassallo would have become familiar with animal painting, which was to play an important role in his oeuvre, not only as an independent genre but in relation to figure painting, and indeed our painter has often been confused with Giovanni Benedetto Castiglione, known as Il Grechetto (1609-1664), especially in his later works.

Many of Vassallo’s more or less mature paintings show his inventiveness in the realm of natura morta, associated – as was often the case in the Genoese School – with its counterpart, natura viva (the Italian terms are more specific and direct than the English still life). Compositions featuring kitchen utensils and animals, mostly domestic, are frequently found in his work, for example in a group of four canvases, one in the Galleria di Palazzo Bianco in Genoa and the other three formerly in the same collection.1

The painting before us offers a new variation on this theme, showing Vassallo’s close adherence to naturalism, with the scene steeped in half-shadow. The motif of the cat, curled up on the ground, is almost a signature of the artist, and appears thus in a number of his pictures. The three creatures depicted here seem not in the least concerned about one another, yet they create an element of dynamism, juxtaposed with the group of inanimate objects beside them; the ewer in the middle serves to stabilise the whole composition.