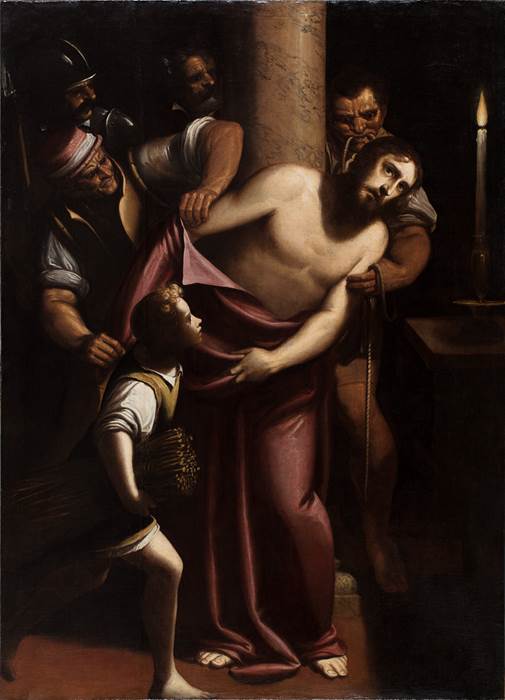 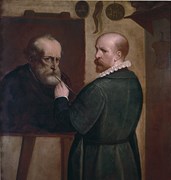 Luca Cambiaso was the son of the painter Giovanni Cambiaso (1495-1579), his idiom, which evolved during the second half of the sixteenth century, stands out from the prevailing language of Mannerism. His style developed according to varied stimuli, ranging from the clarity and monumentality of Michelangelo (1475-1564) to the new art emerging from Parma, especially as regarded treatment of light, in the work of Correggio (c. 1489-1534) and Parmigianino (1503-1540).

Cambiaso began to work on the painting of nocturnes in about 1575 and continued until 1583, when he left for Madrid, where he was employed at the Escorial. In the domain of candlelit scenes, he was an innovator, anticipating similar effects achieved by Northern Caravaggesque painters such as Gerrit van Honthorst (1590-1656) or indeed the Frenchman Georges de la Tour (1593-1652). His nocturnal oeuvre was launched by a masterpiece, the depiction of Christ before Caiaphas (Genoa, Accademia Ligustica di Belle Arti, fig. 1), which is close to our canvas as regards both style and large-scale format.

Here, the candle flame casts a pallor on the calm, resigned face and bust of Christ, thus accentuating the dramatic effect; the light also defines the child who turns towards him, carrying bundles of switches for the flagellation under his right arm. Behind, the figures of his tormentors – synonymous with evil – are deliberate caricatures, their faces furrowed with exaggerated expressions and emphatic features, as found in the background of the Christ before Caiaphas.
This scene represents the moment preceding the flagellation of Christ, and one of the men already has a rope around his left hand, and gripped between his teeth, ready to bind Jesus to the marble-veined column. Bertina Suida Manning hypothesized that the figure of a bearded man emerging from the left of the column, gazing at the beholder, could be a portrait of the artist, who did in fact have a beard, as one can see in the Self-portrait with the Portrait of his Father (Genoa, Palazzo Bianco, fig. 2), but he was also balding and red-haired, which is not the case in the painting studied here.

As for the subject of Christ disrobed by his tormentors, Carlo Giuseppe Ratti mentions having seen such a painting in the last of the six chapels in the convent church of San Francesco di Castelletto (now destroyed).1 However, it is hard to assert that this could have been our painting as there is a record of another version in a private collection in Moneglia (see Comparative work, above). Together with the figures of Christ and the child, a variant of the Christ at the Column (Genoa, Musei di Strada Nuova – Palazzo Bianco, fig 3) only includes the one helmeted soldier busy tying the Messiah’s hands to the column.

Our picture fits comfortably into this series of monumental nocturnes narrating the life of Christ, in perfect dialogue with the Christ before Caiaphas in the Accademia Ligustica in Genoa. Cambiaso’s nocturnal paintings almost exclusively consist of religious subjects drawn from the New Testament, and their development in the 1570s was undoubtedly related to the dictates of the Counter-Reformation. Cambiaso’s late style, often referred to as his third period, may be summed up in the resonant definition of Bertina Suida Manning: “an increasing contemplative serenity and monumental simplicity”2 – a formula later echoed in Lauro Magnani’s straightforward “Meditation, rigour and simplicity”.3 Cambiaso’s role in the history of the nocturne was fundamental, and although he was reviving a tradition already exploited by artists both north and south of the Alps, his interest lay more specifically in the varied potential offered by artificial light. This was a highly original contribution, and it made a true impact on Caravaggesque painting.